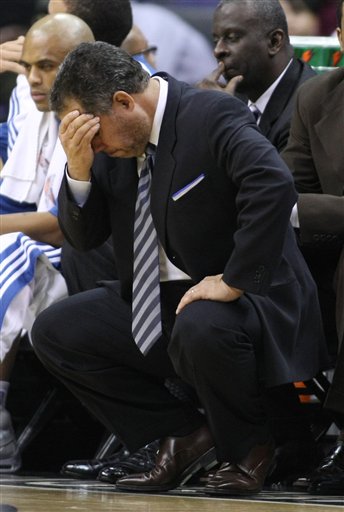 Game Thread comment of the game: "'It looked like Etan failed to come out on the shooter.  Send him to the doghouse!" by Bucky Katt.

I'd probably be more enraged by this loss if we weren't 7-26 already.  Too many bad things have happened this year that have sapped a lot of my ranting energy.

Toronto was missing Jose Calderon, Jermaine O'Neal and Jamario Moon.  Their starting point guard was playing in Europe last year.  Their starting small forward played less than nine minutes per game last year.  Jake Voskhul, of all people, played 16 minutes in this game.  And we still lost, falling way behind early and never catching up.

The way a team starts a game is extremely important in setting the tone for the rest of the contest.  Yes, every point is worth the same, but you establish trends early that often last throughout the game.  In about nine minutes, the starting lineup fell behind by nine points and established the trend of lethargy that became impossible to overcome.  The unit of Mike James, Dominic McGuire, Caron Butler, Antawn Jamison and Andray Blatche was on the court for 15 offensive possessions in the first quarter.  Only three of those ended with a shot inside of 18 feet.  Toronto is not a big team, particularly with Andrea Bargnani in the middle, yet everyone was content to run the offense half-heartedly and force long jumpers.  Meanwhile, Toronto, a team who consistently has strong shooting percentages with poor free throw rates (aka, they're a jump-shooting team), was allowed open look after open look from the perimeter.  They drive to kick out to open shooters, yet we kept overhelping.  It's no wonder we fell behind by nine and never recovered.

Look at the Four Factors sheet.  The two areas where Toronto held a huge advantage was with their shooting percentage (a direct result of a ton of open shots) and on the free throw line.  The Wizards' free-throw rate for this game was pathetic and a direct result of the lack of offensive aggression early.  The two trends established by the lethargic play of the first unit could never be overcome.

The one bright spot was Javaris Crittenton's minutes.  He played quite well down the stretch, particularly on defense.  He has no shot and struggles to finish, but he's a far better passer and defender than he's looked.  Let's hope that keeps up.

Otherwise, this game sucked royally.  The lethargy of the starting unit set a bad tone for the rest of the game.