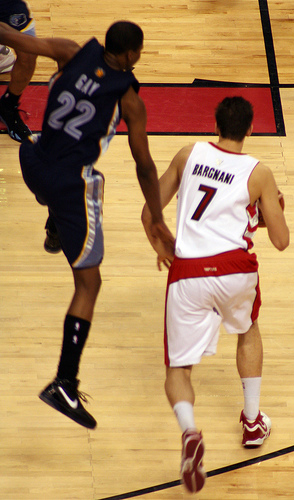 Bargnani Turns Around Gay
via flickr/phillenium1979

The Raps have cats out tonight.....Moon, O'Neal and Calderon....no sympathy here. In case you missed it, I had a Q&A session with RaptorsBlog.com before the game. Read my answers about the Wizards here, and RaptorBlog.com's answers about the Raptors here.

Blatche on Bosh, James on Solomon, Jamison on Bargnani, McGuire on Parker and Butler on Graham to start.

11:07: Blatche doesn't really put a body on Bosh...he gets the rebound and ends up with 2nd chance points for the Raps. 5-0 Toronto.

10:00: Butler makes a needed baseline drive and score on the next possession. 5-2 Toronto.

9:00: The Wizards lack crispness to being on offense.....they're trying to move the ball, but have settled for three missed long jumpers.

7:49: Tapscott calls a timeout to regroup, the Wiz are 1-6 from the field. 10-2 Raptors.....the Verizon Center is so quiet, I think I just heard Steve Buckhantz cut one.

6:43: Blatche hits an open jumper as Toronto continues to concentrate heavily on Caron Butler.....however, I'd like Andray to fill the lane if he is left alone. 14-6 Toronto.

Andray is, however, doing a good job of moving his feet on Bosh's dribble drives.

5:26: Not much awareness of a dwindling shot clock....James hesitates to drive and McGuire has no clue when the pass is kicked to him.

5:08: Back to back Raptor long jumpers...instead of trusting Blatche to defend Bosh, the Wizards are turning their back on the shooters (Jamison on Bargnani then James on Solomon). 19-6 Toronto.

Songaila, Young and Crittenton check in, join Jamison and McGuire.

2:45: Jamison is having trouble with the Italian Spazz....Songaila helps by knocking the ball out of his hands and out of bounds off his leg. Crafty D-Song....that's what he do (note: non-stat sheet item).

2:13: Another shot clock violation for the Wiz -- this offense is as nasty as the weather in DC today. 21-12 Toronto.

1:45: Great hustle by the young guys....Crittenton deflects a backcourt Raptors pass high toward the Wizards end as he's falling out of bounds....Nick Young sprints to save the ball from going out of bounds at the baseline.....and Antawn Jamison is there to clean up with a bucket. 23-14 Toronto.

Overall, the Wizards offense still severely lacks movement (ball and man)....as the PG, I'd like to see Crittenton a bit more proactive.....at least get the ball moving in and out of hands quickly. After one, Raptors 27, Wizards 16 - Toronto is 12-17 from the field.

Etan, Songaila, Crittenton, Young and McGuire to start the 2nd.

At this point....I guess Tapscott is going with Etan first because he's been working hard, but I wouldn't mind seeing JaVale McGee in the game with either him or D-Song.

10:20: Butler comes back in for McGuire.....something has got to happen on offense.....and it does as Etan gives Caron a pass off a backdoor cut for the tough runner. 31-18 Raptors. Phil Chenier comments that the backdoor cut has been MIA lately.

9:26: Crittenton is bad at fighting through the screen against some dude named Roko.....dribble penetration......pass, pass.....Kapono trey ball from the corner. Too easy. 34-18 Toronto.

8:38: Nick Young hits a three...but it wasn't easy. The Wiz offense is relegated to Caron Butler slowly backing down his defender, and when he got it to Young, the shot was still contested. 34-21 Raptors.

This game is BOR-ing.

God the Wizards' offense looks terrible.....they keep running into each other, etc.....have they been practicing? My initial thought is that our coaching staff lacks an experienced offensive mind.

What about this commercial where young "Emily" stands up at an AA meeting and says that in seven years, she'll be an alcoholic? I wonder how her parents reacted when she got the part...."Oh sweetie!...You get to play a future drunk! Well that's wonderful! I mean, that really is the sh*t."

5:00: James and Blatche are back in to join Jamison, Butler and Crittenton.

4:17: Blatche gives Bargnani too much space.....three in his face...yet another timeout for Ed Tapscott. 46-25 Wizards. The camera is near the huddle as Tapscott must embarrassingly relate the simplest of concepts....here's the quote, "You gotta guard the player, you're not.....you gotta share the ball and move it." Buzzer eventually sounds and Jamison leaves the huddle before Tapscott finishes talking -- countless signs of a losing team here.

Speaking of alcoholics......this game is driving me to drink, but I won't considering that I'm watching it at about 1 am.....Smart Water it is. On a related note, I don't think it would be that unprofessional if Steve Buckhantz started drinking during game......it'd be fun.

You know that subtle sound a basketball makes when it leaves your hands......yea, I can hear that on the TV.

Well, the Wizards are kinda-not-really hanging around despite themselves. At the half, it's 50-38 Toronto. Parker, Bargnani and Kapono all have 10 points each.

Antawn Jamison trying to guard the Italian Spazz is like trying to open a drawer without your hands.....can't handle it. Foul, And 1, 55-45 Raps.

6:28: Toronto keeps turning the ball over (5 straight), but the Wizards keep doing things like.....3 second violation in the paint on offense.

Kiss Cam draws the most decibels from the Verizon Center crowd.......gooooo Marketing!

Jake Voskuhl's balding head that he's trying to cover up with a headband makes me feel old. I remember that guy at UCONN.

I shudder just because the possibility of Caron Butler or Antawn Jamison making the NBA All-Star team is even discussed.

1:11: Will Solomon, Raptors point guard, gets an offensive rebound and a flock of Boo-Birds is released into the Verizon Center atmosphere....Solomon eventually scores a layup. 71-56 Toronto.

9:35: Another Toronto turnover...they had 7 in the 3rd.....they are just begging to give this game away.....will the Wizards take it? Needless to write (but I'll do it anyway), but if you've been reading so far, you'll know that my confidence is shot.

9:04: Jamison was near Bargnani....but it must be in the game plan for him to loose track of him and let someone else take responsibility. The Italian Spazz hits a trey....on the other end, Jamison answers with his own three. 78-71 Toronto.

Crittenton is starting to get more comfortable as a creator....he's got a 4 assists so far in the quarter...5 for the game.

I wonder if Mike James is fuming because Crittenton has been playing down the stretch.

The Raptors keep leaving the door open, but the Wiz can't take advantage.....Jamison misses a three....Nick Young travels -- time is running out.

2:01: Wiz focus on Bosh with Songaila on him...and Bargnani gets free for three AGAIN. Really? No...really? Dagger anyone? 92-83 Raptors.

Mike James has checked back in and he's missing threes (I think Nick Young's travel did him in).

The rest of the game takes forever......I fast forwarded through it.