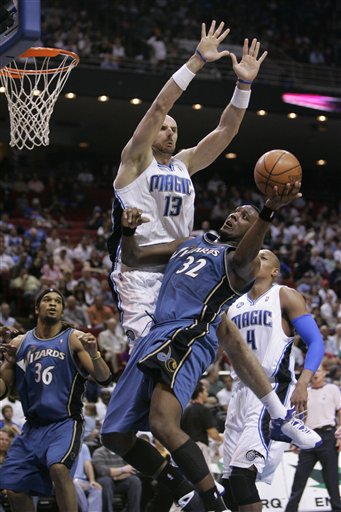 I don't have much to say about this game.  We couldn't score in the second quarter because our idiot guards (including Butler) kept dribbling right into the Magic's trap and we couldn't find a way to move the ball.  In addition, nobody cleared the zone for isolation attempts, which led to a lot of Andray Blatche channeling his inner point guard (poorly).  We then ralled because Caron Butler had an uncharacteristically ridiculous shooting night.  Love Tuff Juice, but that's the only reason we stayed in it.  That and Orlando's odd insistence of going away from Dwight Howard.  Make no mistake about it, we didn't stop Dwight.  Orlando stopped him.

The bigger issue is the Blatche situation, which bothers me to no end and caused me to go into this game with a lack of enthusiasm.  More on this below the jump.

When I was at the Cleveland game, I remember wondering why Andray Blatche wasn't playing down the stretch.  From up high above, we saw Blatche in his warm-up jersey and assumed he re-aggravated his ankle injury.  Apparently, that wasn't what happened at all.

Center Andray Blatche, who had started the last 10 games, was replaced in the starting lineup by Darius Songaila because of a "team matter," Wizards coach Ed Tapscott said.

The coach wouldn't get into more detail, but it likely stemmed from a temper tantrum Blatche threw after being taken out late in Sunday's game against Cleveland. Blatche was heard and seen yelling at the coach before being rebuked by teammates and banished to the end of the bench.

I'm not going to condone any sort of shouting match between Blatche and Tapscott.  That's wrong.  But let's think about the stretch that led to Blatche going to the bench.  On the previous possession, he made a great weakside rotation and swatted Anderson Varejao's shot out of bounds.  On the ensuing possession, LeBron made that emphatic dunk and hung on the rim.  Perhaps Blatche was taken out because he wasn't in the right spot on the rotation, but as we discussed yesterday, it was Dominic McGuire that failed to shade LeBron into the help.  How is that Blatche's fault?

Blatche came in less than a minute and a half earlier, and then he was taken out of a game that needed to be closed out against a bitter rival.  Cleveland was sneaking back into the game.  Why wouldn't Blatche want to be on the court getting the type of minutes he usually gets?  And like Stet Sports hinted at, don't you want Blatche to be competitive on some level?  Sure, you obviously don't want him cursing his coach, but that's gotta be better than the listnessness we've seen too often in his career.

So whatever, Blatche sat the rest of the game because he disrespected his coach in a misplaced use of competitive rage.  Things like this happen all the time, particularly on losing teams.  I remember when Tyrone Nesby cursed out Leonard Hamilton in 2001 and had to be thrown out of the game.  Yet eventually, T-Nez got another chance and was better for it.  There's also a passage in Seven Seconds or Less that describes a rift between Mike D'Antoni and Raja Bell.  During a blowout loss to the Spurs, Bell deliberately ignored D'Antoni during a timeout.  Things didn't get sorted out for a couple days, but all the while, Bell played the same amount of time.  Raja and D'Antoni talked behind doors and got stuff cleared up.  A player getting upset at his coach for being taken out of a game is a relatively common occurance.  It's common enough to not make it as big a deal as Tapscott has made it.

By "big deal," I mean that it's affected his player rotation, and that's wrong.  When a player screws up on the court, then the answer is to cut his playing time.  Ergo, if Blatche really was out of position so badly, then sitting him down in the fourth quarter of a key game is more justified.  However, once you're talking about something off the court, like disrespecting a coach, then it's completely unprofessional to make it an issue of playing time.  Preventing Andray Blatche from playing is not going to get Andray Blatche to respect Ed Tapscott, not when Blatche's paycheck is larger than Ed's.  This is the biggest difference between college and the pros.  In college, you do this stuff because the "love of the game" is the only reason the guy is playing.  He's not getting paid and he's seeing no tangible reward for his services (yes, I realize there are plenty of intangible rewards).  It's akin to grounding your teenager for yelling at you.  You do that with a teenager because he does not possess the maturity to deal with it any other way.  The teenager isn't an adult doing adult things.  But Blatche is 22 years old playing professional basketball as his job.  Even if he sits out, he still makes the same amount of money.  The only thing gained is further resentment of the coach.  Moreover, treating Blatche like a kid could lead to him acting like a kid.  How can you possibly convey to Blatche the importance of carrying yourself like a professional when you're essentially disciplining him like a 15-year old?

Obviously, it would be nice if Blatche would just play the good soldier, but it never works that way in the NBA, even with great players.  The only thing that happens when you bench somebody for disrespecting you is they resent you enough to not change their ways.  As a college coach, you have much more power to forget about your players' states of mind.  In the NBA, where player and coach are on vastly different pay scales, everyone has to be on the same page.  When you bench somebody as punishment, particularly someone like Blatche who has never been a good preparation guy, it messes with their head and affects their performance.  Blatche's game against Orlando is a perfect example of this.  He checked in and looked like his mind was preoccupied.  He didn't box out anybody, was slow on rotations and kept trying to create for himself off the dribble.  All the same problems he's had even when things have gone well. And when that happens, the team suffers.  Blatche has improved tremendously in the last month or so.  He's turning it over less, shooting better shots, rebounding a bit more and providing consistent production instead of teases.  It's no accident that's coincided with a slight uptake in the team's play.  The Wizards are 10.6 points better per 100 possessions with Blatche on the court this season, so it's not surprising that they almost fumbled away the game against Cleveland.

It's not fair to make too many assumptions, granted.  Maybe Tapscott did talk to Blatche and got nowhere.  I don't doubt he talked to Blatche, but knowing the way Tap has praised the guy, I'd be very surprised if Blatche wasn't apologetic for his behavior and expressed that to Tapscott.  I could be wrong there, so I don't know.  But if Blatche is still upset, there are more effective ways to punish him that reinforce his status as a professional.  For example, you could fine him repeatedly.  Fining is a great way to instill discipline because it hits Blatche in the area where it hurts most.  There's no need to sugercoat this, because it's true.  The difference between professionals and amateurs is that professionals get paid.  To a certain degree, professionals play to be paid large sums of money.  That's their payoff.  When you attack a professional for his professional behavior, you have to punish him like a professional.  You don't punish him like he's still in college and only plays for love of the game.

Let me give another example that happens at the newspaper all the time.  Suppose you have a writer who is tremendous at his job, but sometimes struggles to get his stories in on time.  Even while this happens, he's extremely reliable, takes multiple stories all the time and provides an incredible example to the rest of your staff as far as writing style.  Let's say you've discussed with him how he needs to improve and he's started to show some of it.  But during one week, he misses a deadline and gets upset when you express your disappointment.

What's the play here?  Is it to banish him to the lower beat or, worse yet, prevent him from writing again?  Or is it to sit down with him, explain how he's come too far to have this happen again, explain why you're so exaserbated and how his improved work comes with greater expectations, not stopping until things are resolved?  Under scenario one, you either lose or deemphasize a great writer and your paper suffers. That's only good for you.  You don't have to deal with any more disrespect.  But it comes at a cost to the product you put out and your writer will never respect you like he did before.

That's what Tapscott risks with this type of treatment.  He risks throwing Blatche into a further funk, which will, in turn, affect the team.  This is the NBA.  You don't punish men by benching them.  You punish them by taking away from what makes them professionals: their paychecks.  Or, you talk to them and work things out.