Wizards Game 32 Blog vs. Those Guys from Cleveland

Share All sharing options for: Wizards Game 32 Blog vs. Those Guys from Cleveland

Already knowing the outcome, but not the details...such as the score.....(wanted to keep it all a secret during, but between everything webby, it was kinda hard), I sat down at 11 pm on a Sunday night after a day of travel where my bag was "lost" (the computers tell me it made it to Reagan National -- a search in reality indicates otherwise) to see how exactly the Wizards pulled off a Sunday afternoon win against LeBaby James and the Cleveland Cavaliers (word on the street is that the refs called some sort of late game travel on the 'anointed one' -- David Stern is NOT happy). 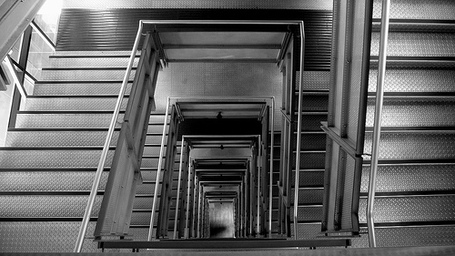 Get it? Steps.
via flickr/harry harris

Caron starts out on LeBron -- I guess with Delonte West going off from three last game, I don't mind Dominic McGuire covering him instead of LBJ.....D-Mac can close out on shooters real nice like.

9:35: Varejao gets a surprise four quick points on Blatche, but Andray comes back with the right to left up and under that he's been honing. 10-6 Wiz.

8:30: McGuire hits a pumping athletic layup off a nice pass from Blatche.....Wiz are perfect from the field and up 14-6.

LeBron and Caron are trying to be dueling banjos from outside.

4:53: Mike James with a veteran move to draw (and sell) a charge against Mo Williams on the fast break.....James has drawn a handful of charges since coming to DC.

0:37: Crittenton baseline drive against the smaller Daniel Gibson...miss, but foul....nice to see him be assertive, except when he bricks both FTs.

0:00: At the buzzer, Caron rebounds a Nick Young miss and nails it off the backboard as he's falling down...almost all in one motion. 26-23 Wizards after one.

Better than expected start for the Wiz in the first 12 minutes. The stars, Caron Butler with 11 points and Antawn Jamison with 7, set the tone early without the supporting pieces forcing the issue just to keep up with Cleveland. Blatche's ankle looked okay and Dominic McGuire was assertive against Delonte West on both ends. Only two Wizards turnovers to Cleveland's four, and no offensive boards given up to LeBron & Co.

I didn't get to see very much of the Celtics game, but I like to hear Steve Buckhantz talk about the nice passes made by Crittenton during. Javaris just got a rebound, hopefully he keeps up the good work on both ends.

10:40: Blatche with a strong move against JJ Hickson......you can tell under Tapscott's reign that AB has made a conscious effort to mix offensive post play with the occasional ill-advised jumper.

9:43: Another great pass by Blatche...Sasha Pavlovic just lost McGuire who went to the open spot under the hoop -- wow, that's four assists for Andray. 32-27 Wizards.

9:04: Blatche board....McGuire miss....Jamison board....Jamison miss....Blatche tip board and in -- continued effort on the glass from the Wizards. Cleveland has yet to get an offensive board...and this is supposed to be one of the best rebounding teams in the league -- but not with Varejao (lacks energy today/tonight) and Hickson holding down the front court. 34-28 Wizards.

8:38: Well, there it goes....Pavs misses two FTs and he's able to get his own loose rebound against a relaxed Wizards team.

7:52: Crittenton's got length...and quick hops....in a contest of a quick Mo Williams pull up for three -- the result is an airball.

6:58: Not sure why the Wizards run so many clear-outs for Etan Thomas in the post ("so many" being any at all), but they do.....he misses. Sympathy shots in exchange for hard work?

3:11: BS call (kinda)....LeBron is in the triple-threat with the ball low at the top of the arc. Caron has an arm extended. LeBron jumps and brings his arms, in the shooting motion, past and through Caron's extended arm (Caron tries to quickly retract -- but there is still minimal contact) -- shooting foul, make.....four point play. I just don't like the call when LeBron initiates the contact, but I guess that Butler did technically have his arm in LeBron's space. 43-38 Wizards.

2:51: Etan Thomas gets on offensive board with all five Cavs around him...and they continue to watch as he throws down one of his swinging-slap-ball-flying slams. 45-38 Wiz.

1:00: Ugh...Mike James throws up some garbage, but Nick Young forces Mo Williams into a travel on the break.

Butler just misses a long three at the half buzzer, but a great half by the Wiz. LeBron James had to carry his team with 17 points and 7 assists, but the Wizards still lead 47-43.

10:00: The first camera shot of DeShawn Stevenson bow-tied up with the suede (or is that velvet?) jacket. Mr. Irrelevant has the look....somewhere Damon Jones' NBA career is turning over in its grave.

9:12: Dominic McGuire gets a sweet pass....misses the two-hand dunk, but has a quick spring to get the board and put back lay -- the Cavs are really sleeping on the glass. 52-45 Wiz.

8:18: Wow -- Mo Williams turns down an open FT line jumper to pass to LeBron for a contested three miss on the wing. Curious.

7:13: More Cleveland snoozing on the glass....the Wizards get three chances at the bucket and it ends with Mike James passing to a cutting Blatche for the layup. 54-46 Wizards.

5:45: Wally World maks an appearance for Cleveland......and earns a flop charge on Caron Butler about a minute later. Unlike LeBron, Tuff Juice incapable of shedding tears.

4:30: Silly Andray....his man sets a pick for LBJ on McGuire.....Andray is not there to properly help, but he does reach out to caress Baby James with a foul. If you're going to foul him, FOUL him.

That was Blatche's 4th foul and Darius Songaila will check in....you know he will "foul" LeBron....with a chop to the neck (hopefully).

DeShawn Stevenson sideline interview with Comcast's Chris Miller: "I don't like him" (in reference to the "anointed one" -- I hear ya DeShawn)

1:51: Looks like a forced shot by Nick Young (guess he just had to gun with Wally Szzzerbee-YAK defending)....but he makes it. 64-54 Wizards.

To Mike James' credit, he's slowed down his offensive game a tad and has concentrated more on being a driver/distributor (so far).

Solid 3rd quarter from the Wizards. Nick Young scored 6 points in the last three minutes (very key for the team to have his rapid offense) and Antawn Jamison has already notched a double-double....currently has 20-10.

68-54 Wizards.....you can tell the Verizon Center crowd is suspiciously quiet.

The 4th starts with Crittenton, Thomas, Butler, Young and Songaila.

Crittenton begins by getting to a defensive board before Etan Thomas.

11:09: Wow....they call an offensive foul on Daniel Gibson....on a three-point jumper. Gibson clearly stuck both hands out (and perhaps a foot) on his descent to deliberately draw contact with Nick Young.

10:32: Ugh....SERB-EE-YAK gets a slow as molasses jumper on Caron Butler. Steve Buckhantz tells us that's the first Cleveland point in 7.5 minutes.

With this lineup, and Butler and Young the only ones really capable of scoring, or running the offense, which is currently anemic. Just under 9:00 left in the 4th and the Wiz only have two Caron Butler FTs to show.

Buckhantz reports that the Wizards have 8 second half turnovers, but Cleveland has only shot 28% from the field in the same span.

7:30: Mike James, Dom McGuire, Blatche and Jamison check back in to join Butler.

6:33: OH god.......offense still bad (no FGs for Wiz so far....only Wally's 2 FGs for the Cavs) -- LeBron drives.....they call an offensive foul (it is a questionable call as Mike James turned his shoulder). As Mike Brown's baby boy is on all fours, holding his mouth as usual, the Cavs coach sprints on the floor, gets a couple technicals, and gets thrown out the game. Wow, that was fast.

5:11: FINALLY! A Wizards FG by Antawn Jamison...and what do you know, it comes on a 3rd chance at the basket....the type of persistence we've only seen recently from this team. 73-63 Wizards.

3:50: Cavs score...McGuire dribbles it off his foot. 73-65 Wizards....and the Verizon Center becomes restless.

3:27: Oh Antawn Jamison....you definitely know better than to foul a three-point shooter by jumping right into him. Gibson makes all three FTs. 73-68 Wizards. Cavs on a 14-3 run in the last 7.5 minutes.

1:58: Wiz win a jump ball...Mike James drives...doesn't have numbers, starts to pull it out, but then turns and fires from the baseline......miss....Phil Chenier would have liked to see more patience (me too). Two LeBron FTs on the other end makes it 77-75 Wiz.

0:48: And Mike James passes it to......NO ONE. I don't give a damn if the Wizards did end up winning this game, 8 turnovers to 2 field goals in the 4th quarter (so far) is very, very concerning.

10.5: Songaila frees up Jamison on a baseline screen...Nick Young gets AJ the ball.....Steve Buckhantz almost jinxes the Wiz by calling it a game winner (AJ makes) and then retracts, saying "potential" game winner. Looks like the Wizards will win in spite of themselves and Steve Buck. 79-77 Wiz.

0:02.3 A travel is called on LeBaby and the rest is history (and justice).