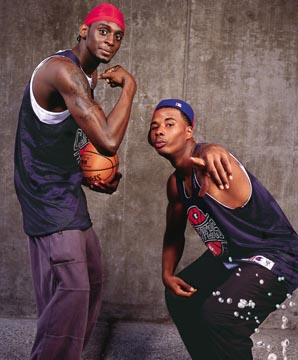 Key Links: (drop any others in the comments)
Clips Nation
Clipper Blog
Clips Nation Open Thread
Game Day Clippers
The Other Side: Clippers

On the wooden tundra of the Verizon Center, two titans will clash for the right to call themselves the worst team in the league. Hundreds of millions will tune in only to realize that they had much better things to do today. Advertisers will spend large sums of money to ensure that their ads will not run during tonight's game. Tonight's MVP will take home a $100 worth of stock in Circuit City.

But if you're looking for some excitement, you may have just found the place. This game has players former All-Stars in Baron Davis, Caron Butler, and Antawn Jamison. We've got a former DPOY and a former 6MOY playing tonight. Eric Gordon, Nick Young, and Al Thornton are three young guys who are capable of filling it up with the best of them when they're hot. JaVale McGee and DeAndre Jordan are two big guys with the potential to be great someday. And most importantly, the Wizards are 4.5 point favorites tonight. Who doesn't want to see that?

This is an open thread, so bust out your fist-head moves here.