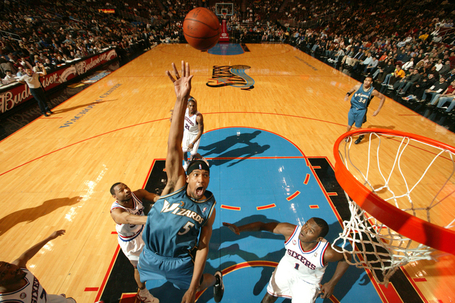 Game Thread Comment of the Night: "McGuire follow slam his own shot!!  Remember that clip of Larry Bird rebounding his own shot and then laying it in?  Yea, well that can go to hell." by Truth About It.

Since it was DeShawn's first game back in a month, I want to focus the recap on how his presence affects the team.

Coming into the season, we all knew the basic scouting report: Good, but not great defender who provided value offensively by being a guy that could stretch the defense with his outside shot.  He's a gritty guy that coaches and players can respect because of how he plays through pain and is willing to do whatever it team needs to get a win.  Sadly, that's not the Stevenson that you hear a lot about because that's masked by his feud with LeBron James and his overall wackiness.

After coming to Washington in 2006-07, Stevenson really found his role as defensive specialist and a guy who work effectively as the 4th option and knock down open shots when the Big 3 were covered.  Last year, his numbers dropped a little because he was forced to be a bigger part of the offense with Gilbert out of the lineup, but he was still playing decently and I think most of us assumed that even though the team would be without Haywood and Arenas that he'd stay close to the level we've seen the last few years.  I mean, who hits the wall at age 27, right?

Other than a slight improvement in his passing skills (likely a result of being asked to work more as a point guard this season) Stevenson has fallen off in just about every way imaginable this season.  I'm still holding firm to the belief that there has to be some sort of external circumstance or circumstances that has caused his decline this season, because players at Stevenson's age just don't fall off like that.  Whether it's his back problems or his hamstring issues or maybe just not having Arenas and Haywood in the lineup to keep defenses honest, something is limiting him.

While it's hard to put a lot of weight into a player's first game back, it didn't look like the month that Stevenson spent trying to heal up did much to improve his performance.  1 point (0-6 from the field, 1-2 from the stripe), 4 assists, and 3 rebounds in 23:29 sounds a lot like a statline he would've had before the injury.  I still want to give him a few more games before we say anything definitively either way, but right now it doesn't look.

Even though Stevenson's performance wouldn't necessarily indicate it, he did have a positive impact on this game, albeit somewhat unintentionally.  Dominic McGuire and Javaris Crittenton (two players who stand to lose playing time now that Stevenson is back) stepped up and had their best games as Wizards last night.  If DeShawn's presence makes those two (and hopefully Nick Young) hungrier and leads them to play better, I can live with a few bricks from DeShawn every now and then.