Ok, one new thing I'm going to try and do is a 'Game Changer' for each game. It could be a single play, it could be an extended moment, it could be a run......it could be, like tonight, 16 points from one player in one quarter.

The key to this segment will be screen shots, when possible, and an explanation. Hopefully they won't be as lenghty as tonight's because the Wizards suck way too much for this to be the case every game.

Here's how it went down:

9:33: Play run for Willie. He starts in right corner....Mike James has a foot in the lane, playing help-side, but turns his head too much (he does is not deep enough allowing him to properly see ball and man). There is too much separation as Green cuts to the other corner. James tries to go over the screen (set on the opposite block), Songaila is not in position to help.....baseline jumper. 2 points. 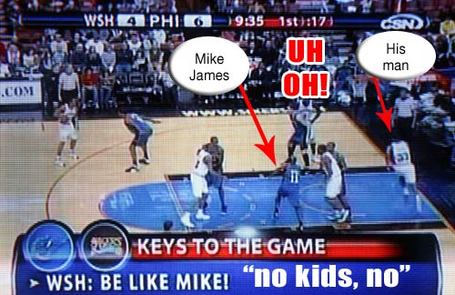 7:03: James shoots, misses, holds his release....while Green sneaks into the backcourt. Butler, the other guard, is who I assume should take the defensive responsibility of getting back on D. He doesn't.....easy layup. 4 points.

5:33: Wiz in their pseudo zone. Sixers have overload with four on the right side. Right side cutter goes through and Songaila misses his assignment on Green all alone on the left wing. Open three. 7 points. COMMUNICATION IS KEY!!

4:16: Green gets a ball screen on the left wing that allows him to drive right. D-Mac is slow to get over and recover. Caron Butler fakes like he will help stop the ball, but quickly jumps back to his man. Why? I don't know...because you gotta stop the ball first. Songaila is thrown off by this and can't step up to help in time. Green tough finger-roll runner. 9 points.

2:38: Nice play by Philly.....Green sets two off ball screens as a decoy, but pops open on the left elbow when McGuire allows too much separation (he and Songaila got tangled). Open jumper. 11 points.

2:12: Sixers in transition. Dominic McGuire gets caught in terrible position, trying to help in places where no help is needed. His man, Green, is open for three on the left wing. Miller finds him. 14 points. You cannot lose track of shooters in transition. 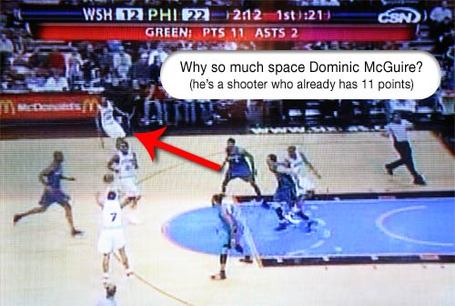 1:44: In transition again...Igoudala picks up the ball on the left wing. Green goes over Iggy and Caron Butler does too, but inexplicably stops and leaves Green open. I guess Butler expected someone else in the zone to pick up....but the Sixers are in transition, Caron probably needs to stay with the hot man. Green open, easy pass for Iggy...jumper. 16 points.

And that's how it happened.