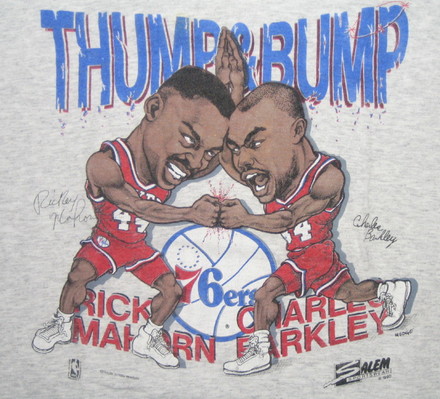 (via The Sports Hernia)

Key Links: (drop any others in the comments)
Liberty Ballers
Sixers 4 Guidos
Sixers Shots
Gameday Philadelphia
The Other Side: Sixers

Welcome back my friends to the show that never ends. We're so glad you could attend. Come inside, come inside.

Money can't buy happiness: If you're someone that believes that spending big money on players in the NBA is a bad idea, this would probably be the game that you would point to as a prime example to prove your case. We all know that the Wiz spent a lot of money this off-season keeping Gilbert Arenas and Antawn Jamison in D.C. only to see the team go downhill this season. Philly spent big money in the off-season signing Elton Brand and re-signing Andre Iguodala and all it's done is gotten them is a .500 record and the 7th spot in the East, just like last year. The two other teams that spent big money in the off-season (the Clippers and Warriors) haven't exactly lived up to expectations either.

Of course, there's been other factors involved with all of those teams' struggles (players have been injured, coaches have been fired, unrealistic expectations, etc.) but it does make you stop and think if maybe we should stop and think about not putting all of our eggs in one basket when it comes to the 2010 free agent class.

He's baaaaaack: After some time on the DL, it looks like DeShawn Stevenson will be back in uniform tonight. This will be Stevenson's first game back since December 30th, so it'll be interesting to see what kind of playing time he gets in his first game back in a month. The concern that I'm sure most of you have right now is that Stevenson will get cut into Nick Young and/or Dominic McGuire's playing time. I know it might be a little frustrating, but let's give him the benefit of the doubt for a few games. There's a good chance some of his struggles were a result of playing through that injury, so if that's the case, we could see him get back to the form we saw last year. We could use a guy like that on the team right now. Maybe not for 40 minutes a game, but we could definitely put him to use if he's healthy.

Your weakness is our weakness: The Wizards' struggles in defending the three-point line have been well documented. They're currently 26th in the league, giving up 38.2% beyond the arc. Luckily, the Sixers come into tonight's game 29th in the league in league, shooting only 32.6% so something will have to give tonight. The first time these two played, the Wizards defense won out, shockingly holding the Sixers to 2-12 from deep but the Sixers still won by 15. In the second go-around, the Sixers hit 9 of their 21 threes en route to a 6 point win. As the results have shown, there's no guarantee that there will be a correlation between perimeter defense and victory, but it certainly couldn't hurt to keep them from getting hot out there.

Match-up of the night: Marreese Speights vs. JaVale McGee

We've got two promising big men from this year's draft playing tonight. Both were drafted in the middle of the first round, with Speights going 16th and McGee taken at 18th. Both are putting up numbers in their rookie season that have to make you think that they'll be in the league for a while. We'll see what glimpses of the future we get tonight.

This is an open thread, so talk about your memories of scaring Manute Bol here.