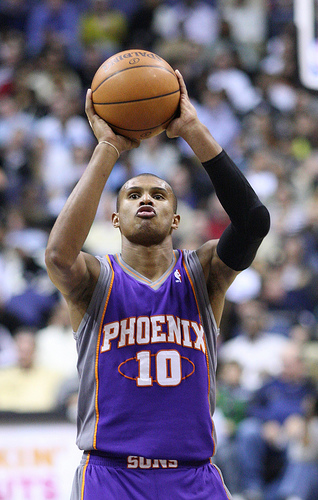 Are the Wizards what the Suns need?

I'm actually a little surprised about how positive that Comcast guys are (Buckhantz, Chenier, Miller)....guess they don't have choice.

Buckhantz relates that the Suns owner (Robert Sarver) was so concerned about losing that he flew to Atlanta for practice (Suns beat the Hawks last night). What the sh*t? How is that going to help anyone. "OH.....the 'Owner' flew out.....guess, you know, we should play better and stuff." Seems like a Danny Snyder move.

8:50: Nice backdoor by AJ, great dribble breakdown by James and look for the pass. The Wiz have employed more cuts in the past 4-5 games....so the Princeton is still useful.

8:06: Blatche gets rejected and handled by Shaq....must be the headband because there that thing goes.

Remember when Amare Stoudemire was the original Purple Jesus ? Now they're talking about trading that cat.

Positive Blatche: His jumper has gotten more consistent recently. His FG% has climbed every month to 49.3% in January.

I think the Suns have a guy on the payroll whose only job is to hold the cup that holds Shaq's mouth-piece while he is on the bench.

3:20: Somehow the Wiz have made an 8-0 run in the last 2.5 minutes (they're playing better interior D with Shaq out and ball movement for Phoenix is a little stagnant). 20-13 DC.

Shaq and Butler create their own impromptu Kiss Cam.

Points in paint 14-6 Phoenix, but the Wiz only had one unassisted basket (6 on 7)

11:17: ARGH! Crittenton with an aggressive drive, but he holds the ball down near his hip and easily gets stripped.

Timeout, Suns up 26-25.....Well, Shaq has only had three dunks while JaVale has been guarding him (one was an alley-oop that should've been called an offensive goal-tend)

Steve Nash is white...and smooth......(not white chocolate of course)....how about Vanilla Pudding? Spin in the lane and crafty layup on a whole slew of Wizards.

4:51: Finally.....a JaVale McGee dunk....oop from McGuire as the Choppa was running the floor.

Jason Richardson has missed two layups, he's 1-9....and a bunch of the other Suns aren't making shots. Give much credit to the Wiz.....they're not making all the Phoenix attempts as easy as a missed layup.

Just the presence of Shaq is intimidating to all these kids......Nick Young, JaVale McGee....of course, this is probably JaVale's first time on the court with the Daddy.....I can only imagine what it's like to be playing right next to him. (I don't think Nick Young has faced him either)

Some points, some dunks, some turnovers.....for both teams.

8:52: Stoudemire hoop...I'm not sure why the Suns aren't going to him every time because it seems that Jamison has less of chance against him than Blatche against Shaq -- then again, Shaq is a willing and able passer, Amare....not necessarily so.

6:14: Hey....lookie there, Andray is smart enough to move his feet and draw a charge on an out of control Amare Stoudemire.

5:07: More solid Blatche....he went up with TWO hands and got strong dunk on Louis Amundson. 69-63 Suns. (of course, Andray tries to goose one up against Stoudemire the next time down the court and gets it sent right back to him)

Well, Mike James is not on....it's not like he's trying to gun, but he's 0-3 and the shots just don't look good leaving his hands. Suppose I'd rather play Crittenton or Dixon....I'd like to think that either could do a better job at curtailing Nash on D.

Crittenton is doing a very commendable job at staying in front of Nash.

Jamison is getting frustrated by no calls.....sure, the Wizards suck, but I think his veteran swag has earned enough respect. (AJ has 25 points and 12 rebounds by the way)

Seems like O'Neal's mouth-peice is constantly hanging out of his mouth....and it looks like 'Billy-Bob Teeth' too.

7:35: Nick Young too much dribble....bad shot, miss. (McGuire comes in for him at the next dead ball....Butler for Songaila too - join James, Jamison and Blatche)

4:11: Andray is trying to dribble waaaaay too much against Shaq in the corner. Sh*t kid....if you can't get him with your initial or even 2nd move, give the damn ball up. Andray doesn't.....gets fouled....somehow hurts his knee.....on the floor.....we'll see.....aaaaaand he limps of the court and into the locker room, hopping on one leg. "Great....just effing great"

Silly Phoenix....they (Shaq and Amare) are dunking and profiling like they're beating a playoff team. That's why I was glad when the Spurs beat their punk asses.......sorry Phoenix, but you are going no where in the year's playoffs.