Share All sharing options for: Alone in Last: Suns 103, Wizards 87

Bright Side of the Sun
Ben's Suns Blog 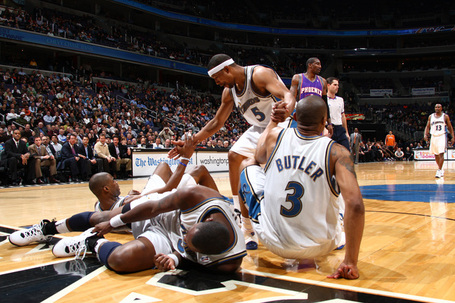 Game Thread Comment of the Game: "I didn't know Hillary Swank played for the Suns." by Matt K.

Even though the scoring deficit was larger last night than it was against Portland on Saturday night, I felt much better about the team's effort and overall performance from this game than I did on Saturday.  There's something that's so much more comforting about watching your team get beaten as opposed to watching them beat themselves.

Most of the attention will be focused on Shaq's performance tonight, and rightfully so.  28 points (shooting 10-14 from the field and 9-10 from the line) to go along with 8 boards, 3 blocks, and a pair of assists.  The thing is, I'm really not sure if there was anything else that the Wizards could've done to slow him down, save for JaVale swallowing a grand piano before the game.  Andray did a fairly decent job of bodying him up in the post and there seemed to be a focus on fouling to make sure that he didn't get easy baskets.  Of course, that ended up backfiring when he hit nine of his ten free throw attempts, but the thought was in the right place.

What won't get talked about as much was the Wizards' complete inability to stop penetration last night.  Steve Nash and Leandro Barbosa were able to get wherever they wanted to on the court.  Nash used that freedom to pile up 15 assists and Barbosa used it to go off for 23 points in just under 27 minutes.  Part of the reason that they were able to  was due to the Wizards focusing in on Shaq, and of course the other part of that is the fact that the Wizards just can't stop anyone from penetrating.

The two silver linings to tonight's game are that the Wizards came out and played better.  The execution wasn't always there, but the effort was, and at 9-35, that's nice to see.  The other silver lining can be found in Stillwater, OK.  Blake Griffin had 26 and 19 last night.  Giddyup!

Other notes from last night's game: