Thinking about leadership and "frontrunning" with regard to Caron Butler

Share All sharing options for: Thinking about leadership and "frontrunning" with regard to Caron Butler 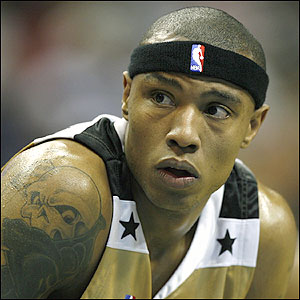 I hate the term "frontrunning."  It's tossed around a lot as a way to criticize players for somehow messing up chemistry when a team starts losing.  The argument is that the player wouldn't be a problem if the team is winning, so he's merely a "frontrunner," a guy who is only helpful chemistry-wise if you are winnig.

The problem with this term is that it could describe 85 percent of veteran basketball players.  Most guys in this league give off more negative energy when things go bad because they are competitive people that badly want to win.  The Kobe Bryant of 2009 is the same person as the Kobe Bryant at the end of the 2006/07 season.  The difference, of course, is that, in 2007, the Lakers weren't very good, while in 2009, the Lakers are the best team in the league.  Kobe's intensity is the same each time; it was just used for different purposes.

So before you all go crazy with the headline, I'm not using "frontrunnig" in a negative light.  But in seeing how this season has played out, there's no doubt that Antawn Jamison and Caron Butler are playing and acting like frontrunners.

With Jamison, it's completely understandable.  Jamsion is 32 years old, having played in the second round of the playoffs just once in his entire career.  He just signed a four-year extension, thinking this team was good enough to contend.  Now, he's once again on a crappy team, and he probably feels he needs to be a babysitter.  I can understand why he snapped when the "T" word came up.  As much as I whine about Jamison's negative energy, it really is understandable and merely a function of our team's record.  Jamison's been the same type of guy, win or lose.

Butler, however, is a different story.  Last year, Butler gave signs that he was in the 15 percent category.  On the court, he trusted his teammates, upping his passing ability significantly while also cutting his turnovers down.  His defensive effort picked up, even if his defensive talent remained lackluster.  Off the court, he became a silent leader, voicing concerns when appropriate while still being the lead-by-example type.  Nowhere was his off-court leadership more prominent than in the first-round series against Cleveland.  Butler struggled on the court, but his words off it made an impression on me.

One year later, and I'm wondering where that Butler went.  No doubt, Caron's still producing on the court quite decently, but his effort and concentration levels seem to have gone downhill.  As we preach all the time here, effort is hard to quantify, particularly when you use something as nebulous as body language (which I won't do), but I think you can look at several troubling on-court stats that illustrate a lack of effort and concentration.  A year after the biggest criticism of Butler is shooting too many jumpers, he's still launching 72 percent of his shots from the perimeter, even though his eFG% on those shots is way down at 41 percent.  He's shooting more threes than ever, even though his percentage on those shots is below 30 percent.  His assist percentage is down just at the same time his turnover rate is up, which helps confirm my suspicion that he doesn't really trust his teammates like he did last year.

Things have gotten worse in January in the "effort-type" stats.  After averaging over six rebounds per game in November and December, Butler is down to 4.7 boards a game in January.  His free throw attempts are down too -- 54 in 12 games as opposed to 65 in 13 games in December.  Butler's offense is good enough to compensate, but it just looks like he's going through the motions on that end.

And don't even get me started on Butler's defense.  He's never been a great defender, but this year, it seems he can't even complete the remedial task of keeping a guy in front of him.  Here's a pretty eye-opening stat: the Wizards are 9.5 points better per 100 possessions defensively with Butler off the court.  This despite playing lots of minutes with Andray Blatche, who scores very well in the on/off department.

Take any of these factors in isolation -- too many jumpers, too many turnovers, too much dribbling into the wrong spots, too little rebounding, way too little defense -- and it's no big deal, but combine them together, and you're looking at a guy who seems to be playing with less and less effort and concentration as the season goes on.

But I'm way more concerned with Butler's lack of leadership off the court.  When Eddie Jordan got fired, Butler went into a mini-depression, refusing to talk to reporters.  Ever since that moment, we've barely heard a peep from him in the papers.  While Antawn Jamison is talking about pride and never giving up, Butler's been conspicuously quiet.  Why isn't Butler also making the same type of statements?  Why isn't Butler trying to pump up the young guys, or at least criticize them delicately?  Butler seemed like an optimistic guy that could stomach a year of sucking and still be a leader, but this year, he's acted like a depressed veteran that has lost any sense of urgency.

It makes you wonder whether it makes sense to vehemently deny that Butler should be traded anywhere.  The logic of that position rests on a couple factors that may not describe the Butler we're seeing this year.  At 28, Butler should be young enough to sit tight through a minor rebuilding effort, but his defeatest attitude makes you wonder about that.  His no-nonsense reputation is also taking a hit as his effort level is waning.  When you consider all this, and you take into account Butler's value around the league, why treat him like some sort of untouchable?  I'm not saying there's any urgency to trade him, but you might as well listen.

If this sounds overly negative, it shouldn't.  As mentioned before, 85 percent of the veterans in this league are frontrunners.  Jamison is a frontrunner. Antonio Daniels is a wonderful true professional, but he is also a frontrunner whose negative energy was wearing on this young team.  Butler, I thought, was different, but as it turns out, he's probably a frontrunner too.  That makes him normal, not a cancer.  The disappointment from my point of view is that I thought he was more unique.

This season has taught us that Butler is neither a bona fide number one scorer nor a bona fide leader.  If last season didn't happen, there's no problem with either of those conclusions.  You always need guys like Butler if you want to win.  But it still needs to be said that you can't build a young franchise around Butler, and it needs to be said that Butler shouldn't be treated as a sort of prized untouchable that should never be traded under any circumstances.  He's merely a very good player that can lead when things are going well, but can't carry a team and can't be the kind of nurturing, yet tough leader for a young, crappy squad.