Share All sharing options for: Why Caron and Antawn can't get it going at the same time 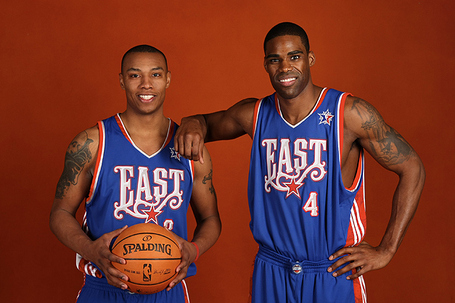 One of the common criticisms that I've heard about the Wizards this year (other than the complaints about their defense, off-season moves, and lack of rebounding) is that last year's two All-Star representatives, Caron Butler and Antawn Jamison, can't seem to get going on the same night this season.

Of course, last year their consistency was a big part of why the Wizards were able to survive the absence of Gilbert Arenas and make the trip to New Orleans for the All-Star game.  This year, their numbers are similar to what we saw last year, but it seems like they're taking turns delivering the big numbers on a game to game basis.

So what's been the difference this year?  Look no further than the starting lineup.  Last year, the Wizards trotted out this starting 5 for the majority of their games:

There's four legit starters in that lineup and one of the better bench players in the league.  You know where most of the offense is coming from, but there's enough talent there to keep opposing defenses from keying in on them all the time.  Now compare that to this year's starting 5:

There's only two players in that grouping that should be starting for an NBA team.  No disrespect to James, McGuire, and Blatche but the reality is that at this point in their careers, they should all be bench players.  The only way the Wizards have a chance of winning this season is when the two starting-calibur players have stellar games.  I know that, you know that, the Wizards know that, and most importantly, the teams facing the Wizards know that.

NBA teams aren't stupid.  They know if they're going up against a two-headed monster with little or no support, a good way to stop it is to focus all of your attention on turning it into a one-headed monster.  Average defenses are good enough to take one players out of their game, elite defenses (like Boston who's taken the Wizards behind the woodshed twice this season) can take both guys out of their game, and poor defenses (like Sacramento, Golden State, New York, and New Jersey; teams that the Wizards have beaten this season) typically can't do a good job of stopping either and that's when the Wizards have a chance at winning.

If you're looking for a reason why Caron and Antawn can't get it going consistently, look no further than their supporting cast.