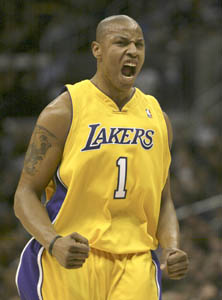 Apologies for the lack of posts/the lack of a Sactown recap. It's been a crazy day here at Brandeis, with major budget-related news going on, and as Editor-in-chief of the student newspaper, I've kind of preoccupied with that stuff.

I'm just finishing watching the Kings game on delay, and of course, the fourth quarter is typical. Taps experiments with a lineup with a bunch of young guys, abandons it as soon as there is any remote sign of trouble (way to trust your young guys, Taps), goes to the awful Songaila-as-center lineup, watches Sacramento start to score at will, and we end up in trouble. The only difference is Taps came back with Blatche this time, but he did it too late and by that time, Sacramento's effot level had picked up and they were on a roll. We held on, luckily, but when your supposed "winning" lineup once again fails to get it done, maybe you should start, y'know, actually nurturing your young guys through tough spells instead of completely abandoning them. At the very least, keep Blatche in longer and maybe don't give Nick Young the quick hook.

Whatever, we won eventually. The reward is getting the Lakers on TNT. Lovely. Andrew Bynum dropped 42 and 15 last night against the Clippers; I shutter to think what he'll do against Darius Songaila.