The Ghost of LaBradford Smith

Share All sharing options for: The Ghost of LaBradford Smith

As you may have deduced from Jake's Knicks win post, he and I got together to attend Friday's game. My father gave my some Wizards tickets for Christmas and in the spirit of giving, I said, 'Why not invite the college kid/blogger who has only been to one Wizards game in his life and whom I've never met?' -- so I did.

You may also know that the one game Jake has attended was also against the Knicks, but this time, his boy Jared Jeffries was playing for the other team....bonus (and in classic fashion, Jake sported his old school Jeffries jersey).

So we got together, discussed our history of blogging, drank some beer (well, I drank enough beer for the both of us as Jake has yet to turn 21), and bitched about Andray Blatche (pk, that was just me....and, I'll have you know, I also bitched about Darius Songaila, who had a pretty poor game that night -- I'm usually a pretty big defender of Songaila, and am down with what Ivan Carter has to say on the very subject).

As the Knicks took the lead in the 3rd and into the 4th, Jake and I were almost comforted in the fact that we could exchange "here we go again" thoughts without saying a word.

But then something happened. Enjoying four aisle seats between the two of us (I had a camera bag, a work bag, a coat, and crap, etc.....plus we were sitting 'two guys at the movie theater seat between us' style), the ticket holders of seats 1 and 2 suddenly showed up with six minutes left in the 4th. SIX MINUTES!

"You have got to be kidding me......ya'll better be good luck," I politely jeered the two ladies......they agreed to my terms. And lo and behold, the Wizards provided us and our row's new guests with a rare comeback win.

So what does all this have to do with the ghost of LaBradford Smith? (btw, I don't think the guy is dead)

Well, as Jake also mentioned, G-Man, the dunking incarnate of G-Wiz, sported an ol'-old school jersey of LaBradford and the picture evidence is below. 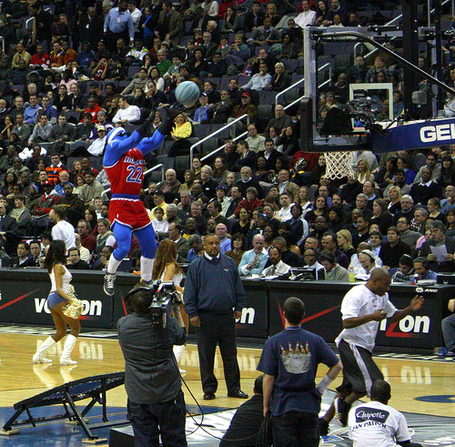 Now here's a video of Michael Jordan's "LaBradford Smith" game....where Jordan dropped 47 points on the Bullets in the latter of a back-to-back between the teams. In the first game, Smith scored 37 points on MJ and his Airness did not take too kindly to that.

[Also notice the cheers that Jordan received from the "home" DC crowd....at least Kobe and LeBron receive a fair amount of boos in this day and age.]

For a good memory of LaBradford, here's a sweet reverse dunk from college.

Oh, and one of the game changing ladies....she was a Redskins fan, so I guess that was cool with me too. 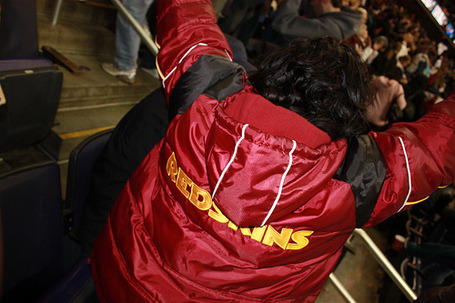 For more photos from the game, you can head over to Truth About It.