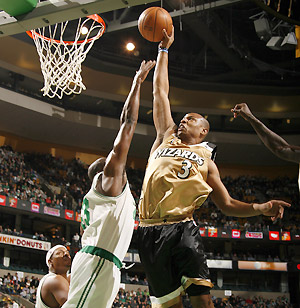 UPDATE: Oh my god, totally out of the blue, Ivan says that DeShawn Stevenson is out for two and a half weeks.

Wiz G DeShawn Stevenson is out with a lower back issue that he said has been bothering him since training camp. Steveonson said an x-ray revealed a disk problem that in turn is causing him problems with his legs.

I'd never wish injury on somebody, but this is going to be a good thing. DeShawn gets healthy and maybe somehow picks things up, while Ed Tapscott won't be tempted to play the guy anymore.

Tonight is a test for motivation. The Celtics are not playing well right now. Since the loss to the Lakers on Christmas day, they somehow lost to Golden State and to a Portland team that replaced Brandon Roy with two players in the lineup (zinger!). They're even desperate enough to sign Stephon Marbury, or so it appears. I guess Jamaal Tinsley isn't dysfunctional enough for them.

So, being the defending champions like they are, you would think that, at home against a lowly team like us, they would be really motivated to absolutely kick our butts, kind of like they did to Sacramento last weekend. And, since they're the Celtics, who always comes to play when motivated, it should be a given that it'll happen.

If they treat us like they did during the game in D.C. last month, then motivation wins. If it stays close, then it loses. Let's show them that motivation is dumb!

(how's that for a motivational speech).