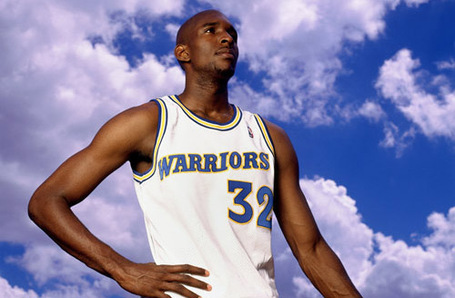 The Essentials:
Wizards (8-31) at Warriors (12-29)
4 p.m. (Nothing like a little Wizards basketball to go along with your dinner!)
Oracle Arena
CSN Correction: The Wizards game will be on DC50 today at 4p.m. It will also be re-aired on CSN+ at 7p.m.

Road trip! Tonight starts the Wizards first Western coast trip of the season. In case you haven't been keeping up, here's who the Wizards will be facing this week:

Looking back: The first time these two tangled, the Wizards were playing their first game after the firing of Eddie Jordan and they came out with one of their best performances of the year. JaVale McGee had two dunks early to set the tone and Andray Blatche came through with the best game of his career, putting up 25 points, 12 rebounds, 5 assists, and 5 blocks in under 30 minutes.

Match-up of the night - Antawn Jamison vs. Corey Maggette: One went to North Carolina, the other went to Duke. Both signed $50 million contracts in the off-season, thinking that they'd be key parts of teams making playoff runs this year. Both of them thought that they'd have the help of dynamic guards that also signed big deals in the off-season. Neither one thought they'd be more than 10 games under .500 halfway through January.

Sure, they're not going to find themselves matched up against one another a lot, but both will be playing with an understandable amount of frustration after a season that's gone nothing like what they expected. The one that's able to channel it better tonight will likely lead his team to a win tonight.

This is an open thread, so reminisce about Mr. Cooper's days as a Golden State Warrior here.