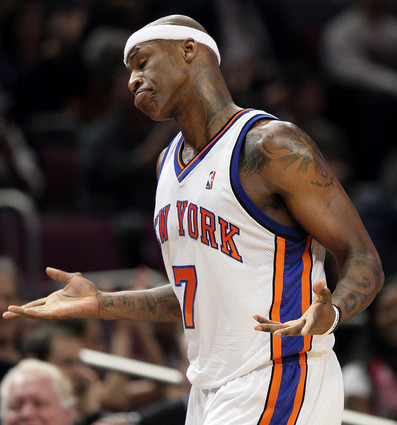 Game Thread comment of the game: "How many times do I have to see Knicks -- Offensive rebound on the ESPN gamecast" by hibachi.

Before we start, let's just sit back and look at those Four Factors for a second.  That's no typo.  Both teams scored more than 140 points per 100 possessions, both teams had an effective field goal percentage over 62 percent and both teams grabbed over 45% of their missed shots.  To provide some perspective, Kevin Broom e-mailed me earlier today to say that he checked with a friend who said there was only one game since 2000 where a team had an offensive rating above the Knicks' tally in this game.  It was the Utah Jazz in a game in March 2008.  The opponent?  You guessed it.

So in a lot of ways, you can throw this game completely out the window as far as analysis goes.  Nobody was missing anything, and when they did, the offensive team usually grabbed the rebound.  How can you possibly analyze such a flukey game?  Sure, neither team is particularly strong defensively, but no team ever gives up over 140 points per 100 possessions.  That's so incredibly rare.  So much so that I doubt we've ever seen an NBA game like that one.

This Knicks loss was nothing like the previous two, even though the score was the same.  In a sense, we didn't succumb to Seven Seconds or Less, as Tapscott and some of you guys are saying.  There were only 87 possessions in this game, which is far below the Knicks' average of 97.2.  If you define D'Antoni-ball as pushing the pace and running like crazy, that wasn't what happened in this game.  We played half-court ball and got back well enough so the Knicks did the same (though that's probably because every damn shot was going in).

In another sense, though, we once again let the other team dictate things.  In particular, our defensive philosophy played right into the Knicks' hands.  As Seven Seconds or Mess, a wonderful new Knicks site with awesome video breakdowns, identified in the Knicks' last game against the Hornets, the Knicks have basically decided that they suck so much at perimeter defense that they'll switch every single pick instead of trying to fight through it.  They've adjusted their starting lineup so that they surround Chris Duhon with four guys who can guard a number of positions (Richardson, Jeffries, Chandler, Lee) so that every time they switch, it doesn't matter as much as it would with a more traditional lineup.  Then, on offense, they space the floor and run pick and roll in hopes of forcing you to switch just like they do.  It's so tempting, because when you do the same stuff on your end, they're switching.  You just do what they do and you'll be okay.

Obviously, that's what they want you to do.  When you switch, the Knicks are better equipped to take advantage of mismatches, since there's no difference in size between their two and their five.  They've created a competitive advantage, but the only way that advantage matters is if you do the same thing they do.

Lo and behold, the Wizards switched every single damn screen the Knicks ran.  Whenever that happened, the Knicks set up Lee or someone else in the post on the mismatched guy.  We'd either leave the mismatch alone, in which case Lee scored and/or grabbed offensive rebounds, or we'd help and surrender a three.  Even if the shot missed, our defensive assignments were so screwed up that the Knicks didn't even have to grab physical rebounds.  Lee barely had to work for offensive rebounds because our bigs were always switching onto guards and weren't inside.

I can't even yell at any one single Wizard, because they all did it.  At different points in the game, Javaris Crittenton, Nick Young and Mike James were all caught guarding David Lee in the post.  The end result was predictable.  Either the entire team decided to not try and get over screens, or that was Ed Tapscott's defensive strategy.  The second seems more likely, and if true, it's yet another example that Tap has no coaching skills whatsoever.

The decision to play small for the last six minutes was mind-boggling too.  Yes, it's true that our best stretch during this game was when we played Antawn Jamison at center.  But that lineup worked only because it was a novelty, a change of pace if you will.  It confused the Knicks for a short period of time -- enough time to get back into the game -- but eventually, the lineup's limitations will show.  Which they did when, predictably, Dominic McGuire couldn't keep David Lee off the glass.  He should never be asked to do so for the key stretch of the game.  And while nobody was playing defense anyway, resorting to a gimmick isn't going to work.  You just don't play small against a Mike D'Antoni team.  That's asking for trouble.

So basically, Tapscott and the team let the other club dictate what they do, again.  Even as we were rolling offensively, we were shooting a lot of jumpers.  Antawn Jamison had his way in the post a couple times, but never parked his butt down there, and Caron Butler didn't start driving to the hoop until the fourth quarter.  Taps been better than we think for player development (I'll explain this in a post later), but he can't coach.  Not in this league at least.

Point being, Blatche doesn't deserve to sit out the entire fourth quarter, not when the alternative is playing gimmick-ball.  Blatche struggled with Lee, but so did everybody else.  Why does he get singled out?  And if it's for something as nebulous as effort or focus, then it bothers me.  Not only because it's wrong to interpret too much from body language, but also because Blatche wasn't the only guy who was exhibiting poor defensive rotations/defensive focus.