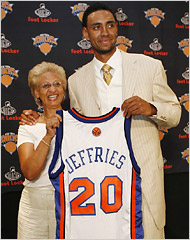 Key Links: (drop any others in the comments)
Posting and Toasting
Knickerblogger
What Would Oakley Do
Seven Seconds or Mess (great video breakdowns)

Rather than preview the Knicks myself, I traded some questions with Knick blog What Would Oakley Do? His answers below the jump.

What's it like rooting for an organization that has clearly punted away the next two years just for the chance to land LeBron James? How do you get yourself excited about the current incarnation of the team?

Cognitive Dissonance is an issue for Knicks fans. We're simultaneously scheming for the future and trying to root for the team in the short term. It's a high-wire act for sure. One reason to keep rooting for a team with a low ceiling is the reality that two sub-.500 clubs made the playoffs in the East last season. I mean most teams have no legit shot at a title this season. Right? So, we're rooting for improvement (and perhaps one home playoff game) like most of the league.

David Lee. Nate Robinson. Suppose you had to choose just one to keep beyond 2010. Who would it be and why?

This is the Sophie's Choice that Donnie Walsh is going to have to make. Both are restricted free agents at the end of this season and both are very unique ballplayers who have benefited from the coaching change. Nate, who is mired in a brutal slump right now, is a preternaturally gifted athlete who can provide instant offense off the bench while playing both guard spots. Lee is a rebounder extraordinaire who is virtually a lock for a double-double if he gets the minutes. Both are fan favorites but both are never going to be the star of a team. At least not a good team. I think the free agent market will have a lot to do with who stays. If a team offers either player a huge payday then we'll probably have to let that player go. As of Jan. 14, I'd probably choose to keep Lee but only at a price that makes sense relative to his spot on the roster. And, of the two, I think he's the one more likely to be overpaid by another club.

What in God's name is Jared Jeffries doing playing center?

The use of Jeffries has been a pet peeve of mine since he arrived. Although he's the tallest player on the court, Jeffries doesn't really play "center." He's more likely to be found floating around the perimeter than messing about in the paint as we run a half-court set and Lee usually defends another team's top post player. Jeffries has actually been opening up games covering the opposing point guard. D'Antoni loves his versatility, but (in my opinion) hasn't figured out what to do with him. I think he's regressed as an offensive player since arriving from DC.

Thoughts on Chris Duhon: is he really playing well, or is he just a beneficiary of Seven Seconds or Less? Does he have a long-term future as the starting point guard of this team?

That's a little of column A and a little of column B. I was very, very critical of Duhon earlier in the year but he's placated me as of late. In this offense the point guard is so important and the club does stumble when Duhon becomes anonymous. He's at his best when he's driving and kicking to open jump shooters and at his worst when he stays around the perimeter. Although he can hit a three, most teams don't seem to respect his shot so he can't space the defense out if he lingers at the top of the key. I'd like to think that we're going to upgrade at the point guard position heading into 2010.

In terms of the "SSOL can never win a championship, ergo it sucks" debate, where do you stand? I'm simplifying the debate, but what's your general position on Mike D'Antoni's coaching style. I'm not really asking what you think of him as a coach, since I imagine there will be positive vibes, but what of his coaching style?

First, I'll air my one complaint with D'Antoni. I think his ego led him to brutally mishandle the Marbury situation. Other than that, the vibes are positive. I think he can coach a team to a title. His teams would need to shoot well for the duration of the postseason as so much depends on having shotmakers on the floor, but I think that every team needs some luck to run through the postseason. As far as his anti-defense rep, I think that the most important part of defense is desire and a close second is ability. I think that D'Antoni can inspire that sort of desire in his players. Everyone seems to genuinely enjoy playing for him. I think he just didn't have players with enough defensive ability in Phoenix. Steve Nash is a turnstile no matter how hard he tries. So, given the right personnel, I think that D'Antoni's style can win a title.

Say LeBron decides to re-sign in Cleveland, D-Wade decides to stick with the Heat and Chris Bosh stays in Toronto. What's your backup plan? Does it disturb you in any way that the Knicks seemingly don't have one? Am I wrong about that?

If all of that happens then the Knicks could still end up signing Joe Johnson, Hedo Turkoglu and Amare Stoudemire. Or some other combination of players who are available that season. Which would still be an exponentially better team than any I've seen in NY since the turn of the century. Everyone forgets one HUGE thing when panning the Knicks rebuilding efforts. And that thing is that most teams do not have a shot at winning a title right now. I'd count the Wizards among that group. And, most teams have no actual plan to acquire enough talent to win a title. And, I'd say the Wizards huge commitment to Arenas puts them in that group too. The Knicks do actually have a plan in motion. It might not pan out, but at least they are actively trying to put together a legit championship roster. And, it won't happen overnight. The 1969-70 Knicks were not built in a day. Why is it wrong that Walsh decided to blow up a team that was abysmal in the hopes of putting together a champion within a few seasons? What else were they supposed to do? Keep together the crappy core signed up by Isiah Thomas? Give Jamal Crawford and Zach Randolph even longer deals? No way. So, I think that most people are missing the boat when they talk about the Knicks "throwing away" two seasons. What exactly did we throw away?