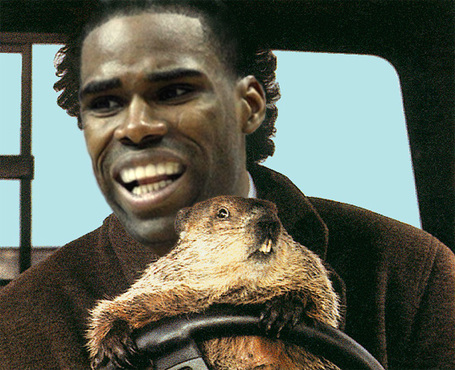 Well, Antawn Jamison is going to start tonight (has an issue with his right knee).....an admirable act, but necessary? I mean, c'mon AJ, I'd like you to last past this season when I still have a semblance of hope for something better. Tina Turner told me via Mad Max that "we don't need another hero" -- well?

1st Bucks possession: Jefferson sets an off ball screen for Bogut who uses it perfectly to fill the lane...Blatche and Butler don't know how to handle....easy points.

11:23: Bogut goes to help on a cutting McGuire who receives a pass, but misses the layup and Blatche is there for a follow slam.

Mike James is still very bad at that runner....look buddy, I like how you can penetrate, but you are no Tony Parker (bet you won't see him on Supernanny either).

Little things: The Bucks seem to be moving the ball well, but are left with missed jumpers for the most part (decent defense by the Wizards to keep them out of the paint).

Caron Butler: two tough missed jumpers that were contested and forced, a missed layup on a cut, an offensive foul, and the failure to push the ball out in front of him and gain separation on the break after he made a steal.

.....Sometimes the Wizards are too willing to double the guards down into the post from up high.

5:38: Butler misses another layup after he got an offensive board....that mental absence.

Timeout Tapscott. The D is decent, but offense is lacking, and mistakes on that end have allowed a couple opportunities for Milwaukee, up 12-9. Etan Thomas checks in for Blatche.

4:06: Butler misses a put-back dunk....Michael Redd hits a three in transition.....Tuff Juice is 0-5? from the field, not much going right for him.

Etan is having a tough run with Bogut too....the Aussie is a bull at getting position down low and is 4-5 from the field with 9 points. 17-13 Bucks.

1:19: Butler finally breaks the ice...first bucket in eight attempts (the 4th attempt on the same offensive possession for the Wiz) 19-17 Milwaukee.

1:07: Crittenton in for Mike James, McGee for Thomas and Blatche for Jamison (really like this lineup) - Butler and Young stay on the court.

0:23: Andray doesn't need to fire up one of those bad jumpers, does he? Well, he does anyway.

McGuire comes in for Butler to play with the rest of the kids (Javaris, Anday, Nick and McGee) to start the 2nd.

11:00: Blatche with the right up and under to the left on the left block....he's really gotten good at that move....now he needs to get another one (scouting report) 27-23 Bucks.

9:56: Very nice Andray.....pump fake from the left baseline and hits a Patrick Ewing style runner in the lane...next time down, Crittenton tosses a nice lob to 'Dray...not the best pass, but AB is able to lay it in softly. 27 tie.

Etan Thomas was taken to the locker room for....something.

7:30: McGee blocks a Joe Alexander jumper attempt....Alexander does not look too confident on the court. Songaila comes in for Blatche on the dead ball.

6:45: Crittenton makes a slashing, winding drive around Ridnour and some other Bucks to the hoop. 31 tie.

It's not just that McGuire has long arms and can sky to get boards....he's got great hang-time too - 7 boards for Dominic already.

4:55: After a timeout, James, Crittenton, Butler, Jamison and Songaila in the game.

3:43: Crittenton abuses Ridnour with a cross, spin and really nice pass to Butler. 37-33 Wiz. Javaris has 2 assists and 3 boards....and I really like how he has the height to play at the 2-spot at times.

The report is that Etan is out with a left knee and is doubtful to return.

Note: Darius Songaila is not allowing Andrew Bogut to be the bull anymore.

Ridnour makes a tough runner at the half buzzer.....he was under a lot of pressure, the Wiz just couldn't get anyone in front of him. But the Wizards had a very nice 2nd quarter, making all 11 free throws, and they lead 52-41 -- mostly thanks to the offensive spark of Nick Young, who is perfect fro the field with 15 points.

Caron turns the ball over on the first possession of the 3rd.....need him to come alive to build on a lead for a change.

10:09: Jamison jumper....knee has looked okay, so I guess I'm glad he played after all...also glad his elbow doesn't hurt as he hits a mid-range baseliner and then a three next time down. 59-47 Wizards.

8:12: Blatche picks up his 3rd foul trying to guard Bogut....looks like a very bad call....Andray essentially pulled the chair out from Bogut and he fell.....AB showed frustration, got a tech, and hit the bench....he's replaced by JaVale McGee.

6:46: And Milwaukee makes a run, 11-5. Bogut has gone back to being a bull and the Bucks are moving the ball well again, but getting in the paint this time (turnovers from the Wizards, 4 so far in the quarter, are also helping Milwaukee's cause) -- timeout Tapscott

4:35: Crittenton cross dribble penetration....kick out to Nick Young for three...GOOD! and that gets Steve Buckhantz excited. Young is 7-7 with 18 points.

0:07: Crittenton makes a jumper to stop some of the bleeding. Phil Chenier seems to believe that's his first jumper as a Wizard. 3rd Quarter ends with DC up 74-69.

DC team defense really broke down in the 3rd. Milwaukee continued to move the ball fast and the Wizards simply could not keep up, opening gaps for the Bucks to drive.

Crittenton, Young, Butler, Blatche and Songaila to start the 4th.

11:50: Right away....Bogut sets a pick for Sessions, Crittenton has trouble fighting through......Songaila helps on the drive and Blatche fails to help on Bogut, barely giving him the matador...dunk. 74-71 Wizards.

Butler travels....he is having a terrible night.

9:57: Nick Young travels.....12th turnover of the game for the Wiz....Tapscott must jump off the bench and urge heads not to hang and his team to get back on D.

Mike James comes back for Javaris.

9:01: There goes James again....missing those runners.

Man Blatche is bad at help-side defense and awareness......am I surprised? Nope. Bogut socres and it's 77-76 Milwaukee.

8:00: Offensive foul is called on Nick Young....I sure didn't think the habit of blowing it as a team was this bad.

6:46: The Wizard are really packing in the paint....to a fault as they pick up defensive 3-second violation #3. Not only that, the refs seem to be calling a really tight game down the stretch, with most going against the Wiz.

6:06: D-Song was doing well earlier, but now he is having a helluva time with Bogut -- Sessions gets away with a travel, gets it to the Aussie, points. 84-79 Bucks.

4:01: Michael Redd kills Nick with a first step on the baseline and strong move....Young comes back and hits a three off a paint kick out from Blatche. 86-84 Bucks.

3:20: Redd on Young again...catches it in the post, give two dribbles, spin then reverse pivot and sweet fading jumper. 88-84 Bucks.

1:54: For a change, the Wizards stop a team taking the ball out under their own basket with 1 second on the shot clock.

1:20: But Michael Redd is a vet.....McGuire gets badly hung on a Bogut screen....Blatche is not even aware that his guy is setting a screen....Redd has all the space in the world....three pointer. So typical, so f-ing typical. 93-89 Bucks.

0:55: Young can't answer with a wide open three off McGuire penetration....Blatche and Butler can't get the tip.

And yep, young Crittenton commits a foul before the ball gets in bounds...Bucks get a FT and the ball....then two more FTs - 97-91 Bucks.

And that's the game......god I hate this. I really f-ing hate this. Sickening.

I can't imagine what it's like to be in that locker room.