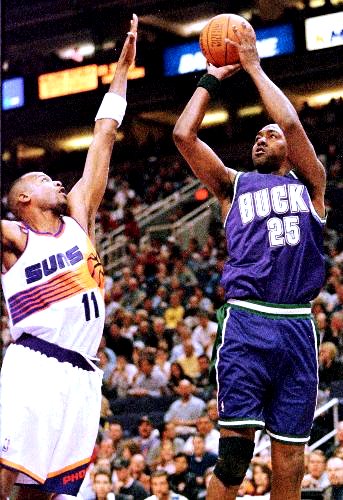 Just think, 37 years ago when these two teams were going at it, a NBA title was on the line. The Bucks had lost less than 20% of their games and the Bullets made it despite just finishing over .500 in the regular season. This time around, we've got one team that's just under .500 facing off against a team that's won less than 20% of their games this season. It's almost like we're watching a bizarro 1971 Finals. Just pretend Andrew Bogut is an Australian Kareem Abdul-Jabbar without the skyhook and that Darius Songaila is a Lithuanian Wes Unseld without the hair or rebounding rate.

3 games under .500 = 5th best team in the NBA. What? Hollinger dropped a bit of a bombshell last week when he put the Bucks 5th in his Power Rankings. While that was probably a bit extreme (they're back down to 13th this week) I'm kind of glad he put them that hight because the Bucks improvement this season has really flown under the radar and as Ziller explains, the Bucks are a team that's better than their record would indicate.

The big key to this year's turnaround has been their defensive improvement under their first year coach, Scott Skiles. After finishing dead last in defensive efficiency last year, the Bucks are currently have the 7th best defense in the league.

(Did I just subtly hint that the hiring the right coach can do wonders with a team's defense, even if the roster isn't loaded with defensive stoppers? Probably. But will Jake elaborate any further on that subject? Not today!)

Not to be confused with Mmm Bop: Another key to the Bucks success this year has been the play of Luc Mbah a Moute who looks like he'll be this year's second round steal, averaging 7.7 rebounds per game and 6.3 rebounds. You probably remember him from the first time that the Bucks and Wizards tangled, when he scored 17 points and pulled in 6 rebounds in the overtime win. Definitely someone to keep an eye on tonight.

Injury Watch: Antawn Jamison will be a game time decision after tweaking his knee on Saturday. Andrew Bogut looks like he'll be back in the starting line-up after missing time due to back spasms.

Quote of the night: "Be cautious. Really be aware of your surroundings, and know where both of the exits are. Watch out for the big girl. Everybody knows what that means. It's true, the big girl always wants to dance with you." Words to live by from Caron Butler.

Match-up of the night - Nick Young vs. Joe Alexander: This battle will not be waged on the ground, it will be found in the skies. As you probably know, Joe Alexander is one of three rookies vying for the final spot in this year's slam dunk contest. Milwaukee is pulling it all out to try and get Joe in the contest this year, coming out with a website devoted to the effort and some goffy commercials. As you know, we've got the site covered, but we're lacking on the commercial front (Call us Nick!).

Young averages about 10 more minutes per game than Alexander, which gives him more time to make his case on the court tonight, but it only takes one dunk to make a lasting statement.

Of course, this could all end up being moot if the rumored Conley for Ramon Sessions and Joe Alexander deal goes through.

We know drama: The Wizards and Bucks have had their share of wild finishes in recent years. After the jump, we'll take a look back.

4-2-08: Ramon Sessions introduces himself to the world.

1-27-08: The Wizards went on an 11-0 run in the final 1:40 of the game to force overtime, only to see the Bucks squeak out a three point win in overtime. Caron Butler had a career high 40 points in the win, but this was also the game where he injured his hip, leaving him sidelined for a month.

This is an open thread, so if you can say Luc Richard Mbah a Moute's name 5 times fast, brag about it in the comments.