Pollin': Who will be less embarrassing?

Share All sharing options for: Pollin': Who will be less embarrassing?

Over the past 3 years, 2 things have constantly given the D.C. sports scene a black eye: The Wizards' defense, and the Washington Nationals. The Wizards have finished 22nd, 28th, and 24th in defensive rating in the last 3 years, respectively. Meanwhile, the Nationals have finished 71-91, 73-89, and 59-102 in that same span. Not exactly the kind of stuff you'll see advertised by the Washington tourism agency.

We won't be able to see if the Nationals can improve until next April, but the Wizards' D has a chance for redemption starting in about a month. Can they begin to restore some pride in the nation's capital? That's the subject of this week's poll. Your question to ponder is, which percentage will be lower: The Nationals' winning percentage in the season they just finished, or the 3 point percentage given up by Wizards this upcoming season?

Before you vote, here are a few things to consider carefully:

Personally, I think the future is bright for the Wizards' defense and for the Nationals. Another year in Ayers' system and the emergence of Dominic McGuire (and maybe Andray?) as defensive stoppers should go a long way in making the Wizards better defensively. The Nationals have some promising signs as well, they've got the top pick in next year's draft, 3 players you can build around in Ryan Zimmerman, Lastings Milledge, and Elijah Dukes, plus an up-and-coming pitcher that should make the team really dangerous next year. I'd say he's a can't-miss prospect. 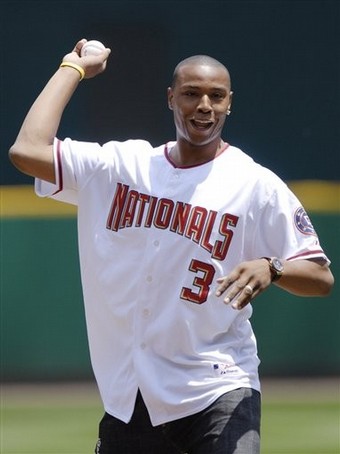