Why is a story about Gilbert Arenas ducking out of Wizards media day given the second-highest priority on your ticker at approximately 7:41 p.m. tonight?  What exactly is the news there?  Why does it matter that he skipped media day?  What exactly is telling about any of the quotes that are in the article?

Do you realize you're only perpeptuating any Arenas backlash by doing this?  There's no real news in there, and yet you're giving it a higher priority than news that Mariano Rivera might need shoulder surgery.  Would you have done this with any other player in a similar situation?  Be honest.

(Note: My screenshot capturer isn't working right for some reason, so if anyone wants to do it yourselves, I'll put the screenshot in the main part of this post.

Update: As of right before the Presidential debate, the Arenas story, entitled, "Arenas, Wizards fined for Agent Zero's silent act," is number three on the list. -TAI 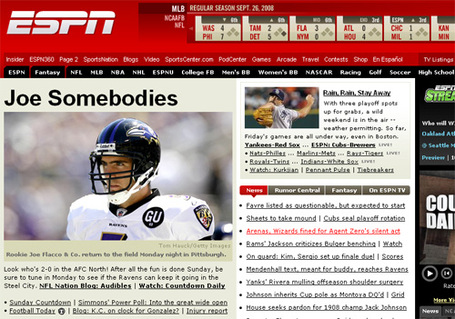