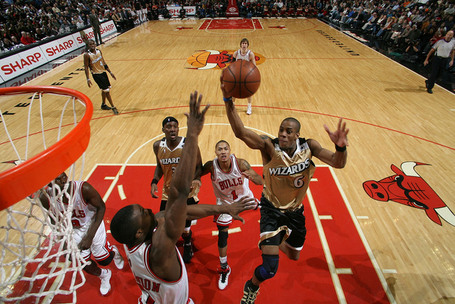 Don't do it Antonio!  Don't do it! (Photo by Gary Dineen/NBAE via Getty Images)

If I'd told you going into last night's game that the Wizards would shoot 54.9% from the field and win the rebounding battle you'd probably assume that the Wizards got a big win and maybe, just maybe, they were starting to turn the season around.

Well, it turns out that giving up 55% on 3 pointers to a team that doesn't have a single player that even shoots over 50% from the field can negate a lot of good work very quickly.  We've gotten use to seeing numbers like this, but it still pains you whenever you see it.  On the bright side, at least we didn't experience "The Aaron Gray Game" Part II.

One bright spot was provided by Dominic McGuire, who threw down a nasty one-handed dunk over Andres Nocioni. If you remember, Nocioni did the same to Oleksiy Pehcerov last year here in Chicago and the play became a huge highlight. Pech hasn't heard the end of it since.

"I told Nocioni, that was for Pech," McGuire said.

Said Pecherov, whose locker was right next to McGuire's tonight: "That's my man. Dom got him back for me."

And really, that's what true teamwork is all about, right?