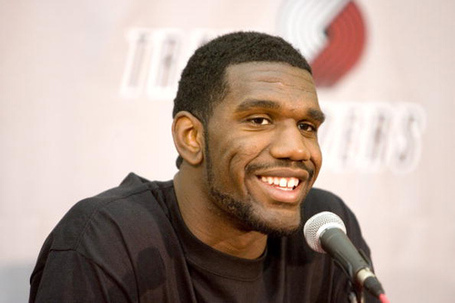 No sense in any theatrics....here's the deal.

11:02: Wiz run a clear out for Dee Brown, giving him the entire left side of the lane....easy drive for a layup on Steve Blake.

10:02: I'm thinking that Antawn Jamison will have his hands full with Aldridge tonight....who easily backs his way into the lane on AJ, but misses the short jumper in the paint...LaMarcus was unable to pay AJ back for the scoop shot he just hit on him.

9:49: Wiz go right back to AJ in the post against LaMarcus on the left block. Face up, mini pump fake, one dribble and righty hook-floater. 6-4 Wizards.

9:20: With Aldridge concerned about Dee Brown driving towards the middle off an AJ pick....Jamison fades past the 3-point line...open and easy kick back for the trey. 7 straight points for AJ. 9-6 Wiz.

9:03: This time, Portland isolates Oden against McGee on the right block...easy back down, fundamental pump fake, McGee bites....foul and two Oden FTs.

8:01: Dee Brown makes his first turnover in two games....Wiz breaking off a steal, looks like a three on two with McGee streaking down low, but Brown tries to hit DeShawn trailing and doesn't see a recovering Steve Blake.

7:30: With Blatche in for McGee, Portland goes to Oden again on the high left block....and the refs make a terrible foul citing Blatche for a foul. Not only did Andray not commit the harm, but Oden actually dipped his wing into him.

At least Andray is prepared for war with cotton already stuffed in his nose for some reason.

7:14: DeShawn Stevenson hits a step-back deuce on Blake....not really sure I like that shot from him, but the shot clock was down to 9 seconds. 11-9 Wiz.

4:41: Blazers almost get a second chance...Butler pays absolutely no attention to his man, Batum, going from the left corner all the way into the lane for an offensive board. Luckily, Jamison tips it away and the Wiz get the ball. Unluckily Dee Brown gets tripped up on the break and Oden ends up with a dunk. 13-11 Portland.

4:05: Dee Brown, aka Scrappy Doo, takes a charge...completely setting up Brandon Roy whose intentions were to drive and kick to Brown's man, Blake, in the corner.

3:49: Blatche makes a nice lengthy drive on Oden...if Greg is going to take advantage of his size, might as well exploit his lack of quickness. 15-13 Wizards.

3:01: Blatche hits a baseline jumper over Oden at about the DC logo....froze him with a jab-pump-jab combo...confident looking shot, funny how those go in more often for him. 17-15 Wiz.

2:34: Scrappy Doo slaps the ball out of Oden's hands, gets the ball from Blatche and breaks the length of the court of a layup.

Someone, Caron Butler, didn't realize that Travis Outlaw checked into the game. He's left wide open in the corner for a jumper after Brown's layup. 19-17 Wiz.

1:23: Wow...Andray Blatche fights for two consecutive offensive boards while the Blazers stand around like statues....something I'd expect Andray to be doing.

0:32: Etan checks in for Andray who'd picked up two fouls. Tapscott has used ten players so far....no AD, no D Mac, and no Dixon yet. Big Oily on the inactive tonight? Yep.

Steve Blake looks older and not so much like an alien anymore....kinda.

The Wiz hold strong to finish the first up 26-19. Portland committed 7 turnovers for the quarter, 3 of them by Brandon Roy. Props to Dee Brown for setting the tone with oodles of pressure on Steve Blake which hindered the Portland offense. The Blazers were only 8-15 from the field while the Wizards were 12-21.

Damn Rudy Fernandez looks familiar...I'm going with John Turturro. Rudy yo-yos with Nick Young, who appears to kinda give up on his defensive stance. Rudy takes a step and hits a wild floater that is probably routine for him.

The Wiz are bumbling a bit on offense...and I really don't like this lineup. Jamison checks in at the 8:42 mark.

With Brown out, AD in (and Young for Stevenson in a certain sense when considering defense), Fernandez and Rodriguez are running the show and the Blazers are able to do a lot more of what they want on offense.

6:30: Case in point: Rodriguez easily drives on McGuire, Young turns his head away from Fernandez to help...while Rudy fades deeper into the right corner....easy pass, too much space, trey ball from Rudy. Tie game at 37. Six straight field goals for the Blazers.

5:50: Jamison's high double off an Aldridge ball screen leaves LaMarcus open to drain a FT line deuce....the Blazers are 9 of 10 in the 2nd quarter and have scored on 8 straight possessions. 41-39 Portland.

Portland continues their run as the lineup of Daniels, Young, Butler, Jamison and McGee can't find a rhythm on offense. 45-39 Blazers with 3:45 left.

With about a minute and a half left, the Blazers have 8 assists on their 10 FGs in the quarter. Does Dee Brown vs. Steve Blake in the first quarter really make that much of a difference? I'm sure the Blaze O is aided by the cold Wizards O as well.

0:51: Caron hits his first FG of the evening, 45-43 Portland...I guess it's a good sign that the Wiz are only down two with Butler's lack of production.

Wiz play good D at the end and DeShawn barely missed a long trey at the buzzer...the score is what it was, 45-43 at intermission.

Steve Buckhantz's interesting stat: Wiz outscoring Portland 24-14 in the paint, but have not attempted a free-throw.

Keep reading for the rest.

11:49: Caron starts by hitting a mid-range baseline J over Batum.

Caron forces the issue from the opposite baseline the next time down the court. Batum plays great D and forces a travel. Caron needs to get that ball moving.

9:56: Stevenson dribbles around and jacks up a three with 7 seconds left on the shot clock....again, no ball movement.

9:22: Wiz make about three passes past half court and Butler throws up a shot from the baseline with 13 on the shot clock and a hand in his face.

8:08: Jamison misses a three, thought he got fouled, but it was still an iffy attempt. McGee gets the offensive rebound but immediately tries to throw up a wild, undisciplined shot and misses. Portland scores in transition. 56-50 Blazers.

Ed Tapscott calls timeout.....get your team together buddy. I know that Portland is playing some nice defense, but I have to believe that the Wiz can still get smarter attempts closer to the hoop.

The Wizards must get 23 more assists before the end of this game to match last night's total, which, of course, was the most dimes the Wiz have dropped in 104 games.

6:25: Wiz go on a quick 6-0 run out the timeout. Butler inside, Butler fouled inside after a scramble for the ball, 2 FTs, and a long Jamison two with Oden on him. Tied at 56.

BTW...Tapscott has his big lineup of Stevenson, Butler, Jamison, Songaila and Blatche in.

5:51: 2nd chance points....LaMarcus Aldridge out works Blatche for a loose rebound, Steve Blake ends up with a three.

4:36: Songaila fights high for a strong rebound and throws a perfect two-hand outlet to Butler almost all in one motion. Caron fights to the hoop for a layup. 62-61 Wizards, Caron has 10 points in the 3rd.

Caron Butler is Tuff Juice....hustles a ton....but why do I feel that he appears disinterested on defense at times. No, it doesn't happen a lot, but even a couple occasions per game would seemingly be unacceptable. Brandon Roy gets him with a slow crossover...Butler is somewhat with him on the drive, but gets picked by Przybilla. Roy misses the layup, but jumps to tip it back in (either him or Przybilla)...Butler just kinda watches. 63 Tie. I really wish Caron would improve his D.

1:44: Bad communication for the Wiz on D in transition. Blatche seems to have good intentions in picking up Roy to stop the ball, but DeShawn Stevenson is right there too. The guy Andray should be picking up, Aldridge, blows right by, fills the lane, receives the pass, and scores the dunk. 67-65 Blazers. Blatche did the same thing against Ryan Anderson against the Nets last night.

1:10: Blatche turns his back on Aldridge who receives the lob, gathers himself and is ultimately fouled by Songaila. 69-67 Portland.

0:05.4: Gotta be kidding me. Stevenson hits three FTs, Wizards press after....but are confused as to who is picking up whom. Being the de facto PG, Stevenson doesn't exactly realize that he needs to be stopping Sergio Rodriguez jetting up the court with the ball. Rudy Fernandez cuts to the hoop from the corner, Nick Young, in turning the wrong way, loses him and ends up fouling Rudy, who makes the bucket. Very bad defense.

The 3rd ends with Portland up 77-72. It's a competitive game, but you wouldn't know it because of the tepid, disinterested Verizon Center crowd.

11:11: D-Mac skies for an offensive board, the Wiz eventually get some 2nd chance points of their own after good ball movement. 77-74 Blazers.

McGuire is playing great D on Outlaw, forcing him into some misses.

I really wish that Andray Blatche would use more lower body and legs when attempting to block out. I know he's got some long arms, but most times, the upper body is all he is using.

Roy makes a lot of things happen for Portland, he scores four more to put Portland up 85-83 with under 5 minutes left.

Unfortunately, with both Blake and Fernandez in the game, guarded by Daniels and Stevenson respectively, Caron Butler is forced to guard Roy....and he's not doing a good job.

4:08: Grow that beard fast son....DeShawn Stevenson misses two FTs that would've put the Wizards down one.

3:37: Butler uses his muscle to drive hard on Blake, Oden comes to help....easy flip pass to JaVale McGee for the dunk. 86-85 Blazers.

2:24: Wiz double Roy to get the ball out of his hands, aggressively defend Blake's three attempt from the corner....he misses, but Rudy Fernandez, previously guarded by Caron Butler, streaks for the offensive board while Caron is standing almost directly under the rim, and gets the put back. 90-87 Portland.

1:30: The Wiz offense amounts to Caron Butler dribbling around, not doing much, and then getting the ball to McGee for a pressure baseline jumper with 5 seconds on the shot clock.....it's an air ball.

DeShawn has played better D against Roy...and the Wiz get a stop. On the other end, Butler drives directly to the hoop off a D-Song pick (no dribbling around) and is able to find Jamison for the lay-in. 92-90 Portland with 52 seconds left.

0:36: Roy slices between Stevenson and Daniels to the hoop while the Wizards watch. Timeout Wiz, 94-90 Blazers. Brandon Roy has 11 4th quarter points.

"That's why he was an All-Star last year."
-Steve Buckhantz on Roy.

0:29: Wizards need to score quick and they do...Butler drives and this time when he dishes it baseline, Songaila is there, a lot more open than McGee was, and drains the two. 94-92 Blazers.

0:13: Wiz try their best to run the ball out Roy's hands (he's joined on the court by shooters: Blake, Outlaw, Fernandez and Aldridge)....and they do (Songaila is almost acting like a rover in the defense Tapscott set up), but the Blazers move the ball around and find an open Blake who drives on Songaila trying to get there to close out and gets fouled.

I believe I'd rather have McGuire on the court in this situation instead of Songaila.

Blake makes both and it's not looking good for the home team. 96-92 Portland.

Bad coaching move.....the Wiz might need a three, it's not necessary, but still, I don't think Daniels and Songaila should be on the court with Butler, Jamison and Stevenson.

Not exactly sure what the play was...Jamison seems to have a window, albeit he was off balance, for a long three....but elects to pass it inside to D-Song who misses a fading baseline jumper. NOT the shot the Wizards wanted...I'm guessing.

Portland secures the board and the Wiz foul....that'll do it. I must question the late game decision making by both Tapscott and the players.

Yep, the final is 98-92 Portland Trailblazers....once again, the Wiz come up short in crunch time.