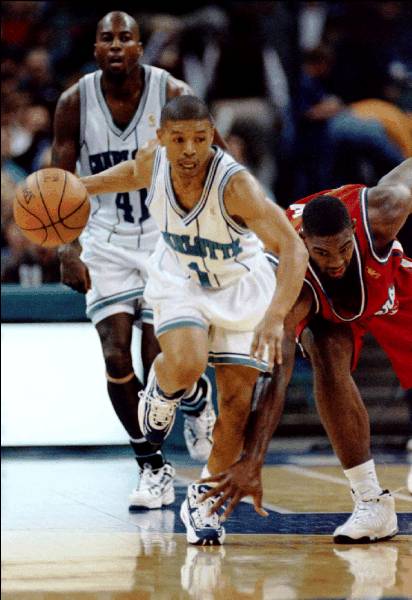 Like Jake wrote, last night's win was definitely out of the pages of the DeShawn Stevenson game in New Orleans last year. We were undermanned, but fought hard and caught a good team on an off night. Last night should also be a lesson in not being upset by playing good teams close. We saw all the problems of past close games, and yet this time, DeShawn's shot goes in, Yao's good look falls short and we come away with the win. The key is making the game close in the first place, which is what we've been doing all season. Sooner or later, you'll catch the breaks you need to win those contests.

Speaking of New Orleans, here we are playing them again. There's a lot of negative thoughts coming out of New Orleans even though they're basically winning at the exact same pace as they did last year. This hasn't been as easy a road as it was then. Peja Stojakovic has been hurt, Tyson Chandler has been inconsistent as hell, Morris Peterson and Julian Wright are in out of Byron Scott's doghouse Palace of Good Play and even David West looks worse than last year. They've gotten a lift from James Posey and Rasual Butler, but really, the difference has been that Chris Paul has lifted his game to another level, even if it doesn't always look like it. KD has it right, the crazy thing about Paul is that he's so good and yet always seems like he could be doing more. Personally, my feeling is that Paul and LeBron are on a plain well above everyone else in the league. Paul's that good. And he's been the stabilizing factor on a team that isn't going on the same joyride it did last year.

It's hard to look at Chris Paul's 10-14, 22 point, 8 assist line and say "Wow, Taser did a great job shutting him down," but that was the case. D-Mac's third-quarter appearance resulted in the Wizards cutting into the Hornets' lead by six points, and while Paul had a couple nice moments, he was mostly neutralized on pick and rolls. The defense leveled off a bit when Taser went out, but the Wizards were still in the game thanks to Stevenson's offensive explosion when Taser checked back in at the 5:22 mark of the fourth quarter. From that point on, Paul attempted just one shot, had 0 assists, and one turnover, at a time when he has consistently closed out games for the Hornets this year. Why? The Hornets kept running the same screen and roll, the Wizards kept switching McGuire on Paul, and McGuire cut off Paul so effectively that Paul was forced to give the ball up, and he rarely got it back.

A lot has changed since then. Taser is a starter now, not a 12th man. But it'll be interesting to see if Ed Tapscott uses McGuire like EJ did. I remember EJ switching up his looks on Paul, sometimes using Taser to guard him man-to-man and sometimes zoning it up so Taser could plug on any s/r. With a lot of other Hornets struggling, that might be the key to the game.

Anyway, more links for your pleasure: