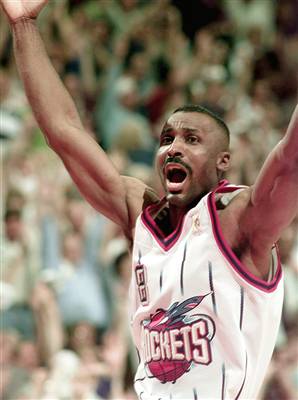 Welcome to the gauntlet: Boy, it sure was nice to play a team with a worse record than us on Saturday wasn't it? Well, don't get used to it, because this next stretch of games is absolutely brutal. In case you haven't been checking the schedule lately, here's a look at the Wizards next five games:

There's tough, and then there's playing 5 of the 9 best teams in the NBA in a nine day stretch with four of those games coming on the road.

Injury watch: We still don't know yet if Caron Butler will be available tonight after spraining his ankle on Thursday. Dave Johnson is reporting that Caron didn't practice yesterday but he could play tonight after missing Saturday's game. Hopefully you all have all your digits crossed, because I don't think I need to explain what happens to the team's chances if Caron goes out.

At least it won't be on national TV this time around: The last time these two teams faced off the Wizards came out with one of their best performances of the season and with nine minutes left in the game they had a nine point lead. Then in the final nine minutes the Wizards were outscored by 21 and lost by a dozen.

But hey, that looks pretty mild compared to some of the collapses we saw yesterday, am I right?

The trade winds are a-blowin': There are some rumors going around about a possible trade between Houston, Milwaukee, and the Lakers. I don't have any thoughts on the trade itself, but I bring it up because if it were to go down before the game tonight, it would leave Houston shorthanded tonight, which plays into our favor. I wouldn't bank on it happening, but it's something to keep an eye on.

This is an open thread, so don't be afraid to celebrate when we make a shot.

[UPDATE] Caron is out for this one and the Rockets are getting McGrady back tonight. That's a bad trade-off.

If the Wizards win tonight, will you celebrate like Eddie Johnson after hitting a buzzer beater?