Share All sharing options for: The Nick Young vs. Rodney Stuckey Debate

Why is this guy smiling? 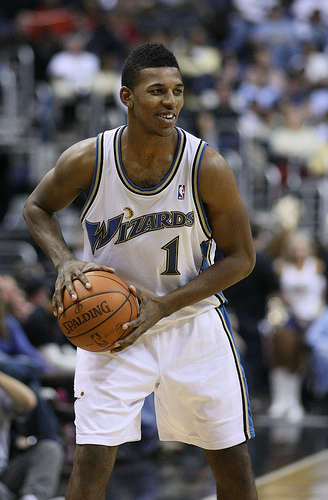 Slam is calling him a stud.

Kelly Dwyer says that the Chicago D was sound.

We can safely (or perhaps precariously) speculate that Ernie Grunfeld would've taken Stuckey over Nick Young had he been available in the 2007 draft, but at the same time, Detroit has displayed flashes of buyer's remorse in not taking Young over Stuckey (ok...not really).

Young has led me to experience brief instances where I'd prefer him over Stuckey....but this year, Stuckey's ability to create for others and play defense (jn addition to his scoring, obviously), has put him slightly ahead, with perhaps last night's effort putting him over the top (in my opinion).

Sure, we know that part of Young's struggles involve the lack of minutes, but a large chunk of Nick's struggles also involve those aforementioned areas in which Stuckey excels......oh, lest I forget this observation about Young by the White President.

Sure this is a moot debate....Young is our guy and we are fully behind his development (I feel like I'm conveniently throwing Young under the bus on xmas eve). But, since polls are fun, what say you.....Stuckey or Young?

(It's also fun to rhyme at holiday time)