I know I've already touched on this subject, but with today being Festivus, it seemed like a good time to discuss some things that I've got problems with.

The East isnt that much better this season.  Really, it isn't: Most of the talk over the off-season was about how this would be the year that the East finally started to narrow the gap with the West and in a way, it has.  Boston, Cleveland, and Orlando give the conference it's best 1-2-3 punch since 1998 but once you get past that trio, there's not a lot left to talk about.

4. Atlanta - One of the few teams in the East to live up to the hype this year.

5. Detroit - A team hovering right above .500 that''s debating whether or not their superstar guard is helping or hurting their team.  Doesn't this sound a lot like the team that was the East's #5 seed last year?

6. Miami - The return of a healthy D-Wade, Shawn Marion, and Michael Beasley has brought the team back to respectability and the playoff hunt.  They're also currently one game over .500 despite having the easiest schedule so far this season.

7. Chicago - A solid team that's survived a tough schedule to this point, unless Derrick Rose hits the rookie wall with a thud, they should be able to maintain this spot and more than likely move up a spot or two.

I think we'll hear from Milwaukee before this is all done and maybe Philadelphia if Brand gets healthy soon and the team can get into some sort of rhythm, they could still make a run but more or less, we're seeing the same story with the East that we saw last year.  There are three teams that are head and shoulders above everyone else, one team that will finish with 45-50 wins, a group of about six teams that will fight for the final four playoff spots in the East though they wouldn't finish any higher than 10th if they were in the West, and then there's five teams range from mediocre to painfully bad.  The teams that fill those roles have changed from last year, but the conference is more or less just as strong (or weak) as it was last year.

Pick on someone your own size: This is probably going to come off as sour grapes, but how is this the dunk of the night?

I give Marreese bonus points for actually dunking on the defender (with authority!) as opposed to around him, but it's not like he was throwing it down on someone that had a chance of blocking him.  When you're six inches taller than the player that you're trying to throw it down on, you better be able to dunk it, or else you'll end up on the wrong kind of highlight reel.  Let's save the Dunk of the Night for Feats of Strength.

Tinsel: I find it distracting.

We don't show Darius Songaila enough respect: You might have heard that Darius was Wake Forest's honorary captain at Saturday's Eagle Bank Bowl at RFK. 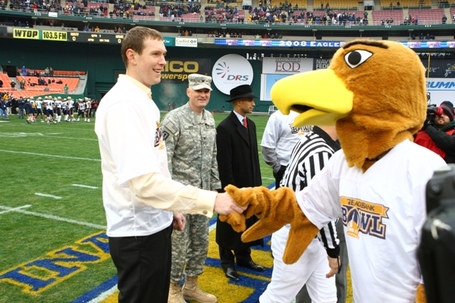 Now keep in mind that at game time, when this photo was taken, it was 38 degrees with the wind chill around 30 degrees and Darius Songaila is wearing a collared shirt.  That takes some toughness, people.  The army officer wasn't even tough enough to go without a jacket out there.  While I'm sure that Darius would gladly accept a coat as a gift for Christmas, he'll probably just end up re-gifting it because he has no need for your silly winter gear.