Share All sharing options for: Expect a lot of Dominic McGuire now

In typical Wizards fashion this season, the coaching staff somehow manages to bungle up even the simplest and most obvious of moves.  If I'm reading this correctly, it took DeShawn Stevenson himself to get Ed Tapscott to finally move him out of the starting lineup.  Nevermind that only Desmond Mason and Raja Bell have worse PERs than DeShawn this season, that DeShawn's supposed defensive prowess completely disappeared this year and that, with tons of young guys behind him on a team that's currently 4-21, his suckitude was blocking guys who may actually be able to improve in the future.

Kudos to DeShawn for selflessly benching himself, but it never should have come to that.  If the anecdote is true (and it may not be, it's possible Ed raised the topic in the meeting and DeShawn said he was okay with it), it just reaffirms the suspicion that the inmates are running the asylum.  There's no real plan, only an unspoken worry of "alienating the veterans."  Ed Tapscott is a nice guy, but he's in way over his head and I would be really mad if he was retained as head coach after the season.

But whatever, the move happened one way or the other and now powerless Ed has a decision to make.  Do you go with Nick Young's offense in the hopes that, if given more minutes with other high-usage players, his chucking will be reigned in a bit and become more efficient?  Do you go with Dominic McGuire in the hopes that he'll provide the essential perimeter defense that DeShawn was supposed to supply?  Or do you move Caron Butler to the 2 and go bigger in an attempt to create a twin towers-like frontcourt with JaVale McGee and Andray Blatche (or, more accurately, go slowball and start Songaila)?

(There's also option four, which is to start Juan Dixon alongside Mike James in an attempt to tank completely.  I'd dismiss this, except nothing this team does surprises me anymore.  Can you tell I'm bitter?).

What would I do?  I'd probably go with option number 3 and give JaVale more minutes.  But you know the team isn't going to do that and it probably doesn't solve our problems anyway.  Our perimeter defense will be even worse and, at this point, JaVale's too undisciplined to be our Brendan Haywood.

So it's down to Nick and Dominic then.  If we were really committed to individual development, we would start Young.  We know what Dominic McGuire is going to be at this point.  He could and probably will improve his shot, but he's not going to turn over a new leaf as a result of new minutes.  He'll still be the same low-usage energy machine that can provide the tools necessary to play strong perimeter defense.  That's hardly a bad thing, but we've simply invested more in Young and, at this point, we're concerned about development anyway.  Starting Young will encourage him to develop his entire game, since there are already a lot of high-usage guys in the lineup.  If you keep Young on the bench, it encourages some of the gunning.  If you want to push him into that sixth man instant offense role, then it's no big deal, but if you want him to become a more complete player, start him and have him learn how to defer to better teammates right from the beginning of the game.

But no matter what, it's probably going to be Dominic.  The organization has made no secret in the need to get more defensive-oriented, and McGuire's certainly the better defender.  His contract is also up after this year, so there's less time to decide where he fits into the organization long-term (of course, our team salary is already over next year's projected luxury tax, so that might not matter anyway).   At least you can wait on Young for another couple seasons if you have to do so. edit: as nate33 pointed out, McGuire has a third year that's not guaranteed in 09/10, so the team could just exercise that.

So what are we getting?  This season, McGuire's hardly turned into an offensive force, but like Nick Young, he's made strides.  Remember how John Hollinger called McGuire "by far the worst offensive player in the league last season?"  That's definitely not true now. 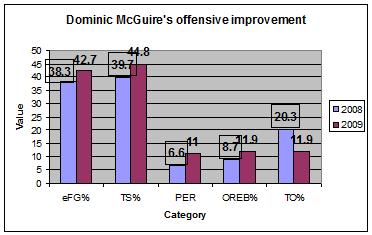 D-Mac's hardly Kobe Bryant, and in reality, he's barely Wilson Chandler either.  But hey, at least he's made some strides.  The turnover percentage is key -- it's basically gone from worst-in-the-league bad to Caron Butler level (which, of course, carries the caveat of far, far, far less usage).  His true shooting percentage would also be higher if he hit more free throws, which I'm confident he'll do eventually.  He's still one of the worst offensive players in the league, but at least he's decent enough to not be a complete liability.

The key is on defense, where McGuire is doing an excellent job.  The team is 3.8 points better per 100 possessions defensively with McGuire in the game, and D-Mac's hauling in more missed shots than ever despite playing more on the perimeter.  I don't know how much of a difference he'll make while playing more minutes, but he has to be better than DeShawn.

So consider this the 57-game trial for Dominic McGuire.  If he passes, he may find himself being our Taser for the next few years.  If he fails, it's probably goodbye.