"I'm sorry, did I break your concentration?": Mavericks 97, Wizards 86

Share All sharing options for: "I'm sorry, did I break your concentration?": Mavericks 97, Wizards 86

With his team less than 10 seconds away from another collapse, Wizards All-Star forward Caron Butler fumed as he returned to the bench during a timeout. He cursed bitterly as he sat down, stood back up, cursed some more and then walked out of the huddle and to the end of the bench, where he plopped down in frustration.

Rumor has it that Caron was walking around the locker room afterwards shouting "What does Marsellus Wallace look like?" 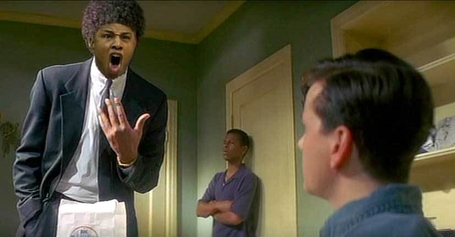 Obviously, Oleksiy Pecherov (seen here working at his other job) was quite shaken by the whole incident, but after Ed Tapscott explained that What actually wasn't a country he calmed down.  He's still scared of talking to Caron, but he's calmed down.

Now as for what actually happened during the game, here's some notes: