Wizards Game 25 Blog vs. Dallas Mavericks: You Gotta Be Kidding Me

Share All sharing options for: Wizards Game 25 Blog vs. Dallas Mavericks: You Gotta Be Kidding Me

Ok, so I had to watch the end of the Redskins game with friends instead of the first half. I flipped some to check on the Wizards, but obviously could not get a good idea of what was happening. From what I can tell by khrabb's comments on the game thread (straight from Poland no less), the Wizards looked okay, showing some energy, and Dallas looked to be a lottery team. So, I now present the half game blog....

Mike James has had a couple nice drives to the left on Kidd. Contact no foul the first time; contact, foul, FTs the 2nd time. 49-46 Wizards.

9:00: Blatche is having a tough time with the physique of Erick Dampier....lob dunk from Kidd on one possession, and on another Damp is somehow allowed to catch a short desperation airball and put it in just before the shot clock expires.

8:00: Stevenson steals a cross court pass, recovers before it goes out of bounds, but then he tries to fire it at a streaking Blatche from close range. Blatche, of course, bobbles the ball and the Mavs recover for an easy Dirk short jumper. 52-50 Wizards.

Dallas is more active in trying to get second chances/loose balls....the Wizards need to pick up their intensity. 60-58 Mavs.

3:00: Dom McGuire is getting physical with Dirk who is trying to get off-ball position. A foul is called, it was only a matter of time until the ref blew the whistle on D-Mac.....Dirk kept using the swim move and butt shove on McGuire, who wasn't going to back down.

1:45: Mike James...misses a jacked three, but picks off a Mavs transition pass, brings it up the court, and hits Jamison with a sweet no look for two. 66-64 Wizards.

Tapscott gets McGee and Crittenton in for Songaila and James with just under a minute left in the 3rd.

Wiz timeout after Dirk scores four straight against porous defense....it amounts to a 10-0 run and it's 74-68 Dallas.

8:22: What is going on here? Blatche picks up back to back fouls (5 total) trying to guard Dirk.

6:39: Singleton picks Butler's pocket as Caron tries to use a Songaila ball screen at the top of the arc....Singleton dunk.....all this as Chris Miller is reporting on the negative "here we go again" body language from the Wizards. 81-73 Dallas.

6:20: Caron does come back to hit a three....but you can clearly tell that he's putting a lot on his shoulders and trying to do a ton -- not exactly the way you win ball games.

5:09: D-Mac is having a terrible run...gets his shot blocked again and then lets Devin George slip right by him to receive the pass for the open dunk. 87-76 Dallas.

But nope, Jason Kidd is picking apart the Wizards' D...The small Dallas lineup of Barrea, Terry and Kidd is killing. Looks like James is trying to guard Barea and Stevenson with Terry.....but Caron Butler against Jason Kidd is a complete joke.

0:50: The Mavs also keep getting mis-matches with Blatche trying to guard Terry or Barea, the latter hits a rainbow jumper on 'Dray. 97-86 Mavs.

Basically it was Jason Kidd's passing (6 4th quarter assists) plus the continuance of ragged Washington team cohesiveness, and the Wizards are now 4 and 21, the day after.

No ifs, ands, or buts about it......the Washington Wizards are persistent at Rising Down. 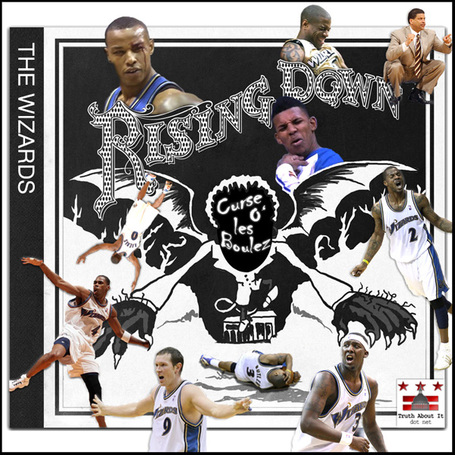