I've got a lot of thoughts running through my head on how I could recap last night's game, but none of them really seem substantial enough to constitute a whole post, so rather make one longer than it should be, I'm just going to combine them all of them together.

Remember those keys to winning that I talked about before the game?  Here's a refresher:

The Pacers are 23rd in offensive efficiency, so the worst thing that the Wizards can do is give them second chances off of missed shots.  If they can do that, and keep T.J. Ford from getting wherever he wants to on the court, I think that the Wizards will have a shot at winning tonight.

So how did they do in those two areas of the game?

I think that's an overall grade of... 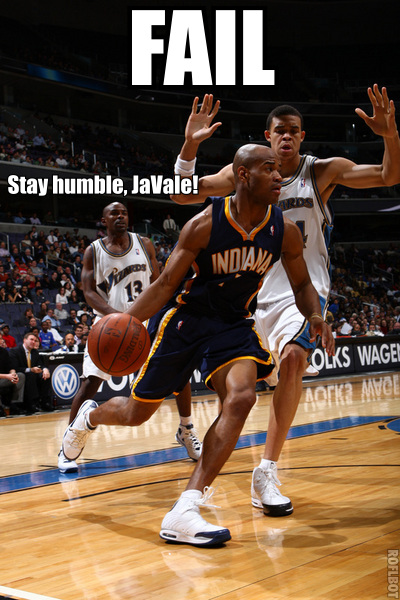 Something that each player can work on for the next game

Andray Blatche: Reeeebounding.  If Tap is going to reward you with a starting spot, show your appreciation by grabbing more than 2 rebounds.  On the bright side, he seems to be aware of his faults.

Caron Butler: Keep your head up.  Times are tough, don't let them wear on you.

Javaris Crittenton: I know it's a byproduct of learning a new system, but 5 turnovers in 8 minutes as a Wizard isn't exactly the best way to start off on a new team.

Juan Dixon: If the only foul you can give is a tap on the back that will in no way, shape, or form affect the way the shooter's ability to make the layup that the shooter is attempting, don't commit the foul.

Antawn Jamison: There's no way for me to prove this statistically, but anyone that's watched a Wizards game this season can tell you that Antawn's three poiint shot is much more effective when he just catches and shoots.  Whenever he tries to add in that jab step that no one ever bites on, the shot percentage goes way down.  Antawn does a lot of things well, but the jab step is not one of those things.

JaVale McGee: Do exactly what you did last night every game.  A little more rebounding probably wouldn't hurt either.

Dominic McGuire: I know it's a not a big deal since he doesn't get to the foul line much, but I'd like to see him hit more than 1/4th of his free throws.

Oleksiy Pecherov: You get in for the final 2:26 of the game and you only put up one garbage time shot?  Get your buckets, son.

Darius Songaila: I would say rebounding, but really, I mean it's not like he's not trying to rebound he's just not physically equipped to be a stellar rebounder.  I can't fault him for that.  Instead, I'll open up the floor to your opinions on this matter.

DeShawn Stevenson: Yeah.  (Though in fairness, is rebounding was good last night.)

Nick Young: Apparently there's more to the "Palace of Good Play" than we originally thought.  Here's the full quote from Tapscott:

I don’t have a doghouse. I have a Palace of Good Play and I am waiting for someone to emerge with some good play from that two guard spot.  When I see that, and when I see someone who is willing to play off our forwards, then I’ll play them.

I could translate that for you, but I think you all know what that means.