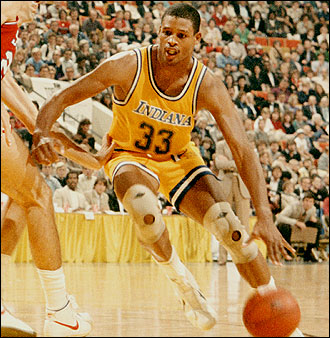 Well, we are playing the PACErs: The Pacers work at the 4th fastest pace in the NBA. Although the Wizards are currently only playing at the 21st fastest pace, they've fared alright against other fast teams so far this season. They lost two close games to the Knicks (1st in pace), lost a game at the buzzer to the Lakers (2nd in pace), and they won easily against Golden State (3rd in pace). They might not win, but they've shown that they can run with the faster teams in the NBA and keep it competitive, if nothing else.

Give us your poor, your tired, your slumping masses yearning to play someone that they have a chance to beat: After beating the Lakers 118-117 at the start of the month, the Pacers have lost six straight, including an 18 point loss to the Bucks on Saturday night. The Wizards have lost their last two games by a combined 49 points. It may not be pretty, but somehow, someway one of these two teams will end their slump tonight. Both sides should be amped to face a losing team for a change. Indiana and Washington have played the 1st and 3rd toughest schedules so far this season.

Bench battle: The Wizards currently have the 6th best bench in the NBA in terms of +/-, but they'll have their hands full tonight with Jarrett Jack. His numbers won't blow you away but he brings it every night and he'll can hurt you if you fall asleep on him. His style of play reminds some of Bob Sanders, but I'm not going to go there until I see people pay Jarrett Jack to drive on toll roads.

No poetry in motion tonight: According to the Washington Times, Etan Thomas will not be active tonight because he's getting a routine heart check-up at the Mayo Clinic. Let's hope everything checks out there.

Match-up of the night - Caron Butler vs. Danny Granger: 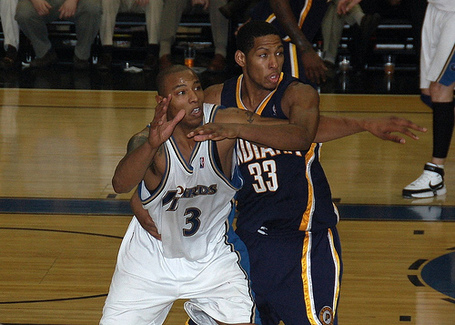 Even thought Caron Butler has been putting up numbers that are comparable to his numbers from the last two seasons, where he was an All-Star, it looks like the team's poor start isn't helping his chances to make it back for a third appearance this season, if the early returns have shown anything.

If Caron does indeed miss out on the chance to go to Phoenix in February, one player who could take his spot is Danny Granger. He's really begun to come into his own in his 4th season in the league. The only forwards with higher scoring averages this season than Granger are LeBron James, Dirk Nowitzki, and Chris Bosh. If Caron gives him open looks from behind the arc, it'll be a long night for Washington.

Final thoughts: I'm not going to say this is a game that should be won because Indiana is a better team, but this is a winnable game. The important thing is going to be keeping Foster and Nesterovic off of the boards. The Pacers are 23rd in offensive efficiency, so the worst thing that the Wizards can do is give them second chances off of missed shots. If they can do that, and keep T.J. Ford from getting wherever he wants to on the court, I think that the Wizards will have a shot at winning tonight.

This is an open thread, so if you can identify the player in the picture at the top of the post, give yourself a gold star in the comments.