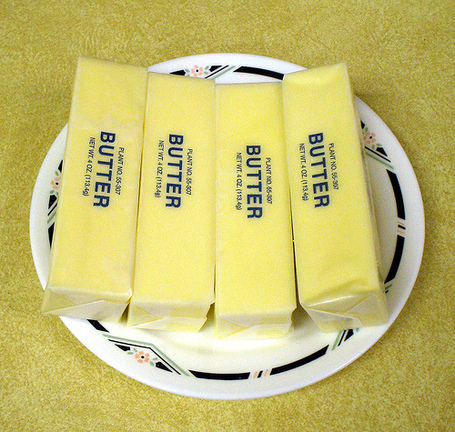 Last night was a 'butter face' game. It started out ugly from the top......and stayed ugly despite a glimpse of something nice about a third of the way through.

In the end, you're left embarrassed and don't really want to talk about it.

Jamison started out gunning...but the Wiz were able to build a quick 4-0 lead with Epic Vale activeness and a lob to......Caron Butler? (don't worry...layup, not dunk variety)

Of course.....McGee had a big target on his back as the Celtics were running designed plays for Kendrick Perkins...'Vale drew a foul on the first Boston possession.

Marv Albert talks about Dee Brown....it's odd to hear that the Wizards have just cut a guy who started 11 out of the first 19 games...hey, it's that type of season.

7:15: Ray Allen is running loose in the early going.....DeShawn Stevenson? His third trey, each one assisted, the middle one being second chance points, puts the Cs on top 14-12.

An unnamed source says that with the glasses and pink jacket, Pam McGee looks like a black Sarah Palin.

4:58: DeShawn Stevenson can do no right....he passes up an ill-advised three to attempt a wild ill-advised drive.....charging was the call that they gave him.

4:09: McGee tires to get off a 10-foot jumper, and even though he is a long dude, he can't get those same jumpers he had in the WAC in the NBA. This one gets blocked by Perkins and Rajon Rondo, unimpeded by no one, gets fast break points. 25-17 Celtics.

This is not good....but the Celtics are who we thought they were.
Andray Blatche comes in for Tits McGee....and he can't handle Perkins either.

1:40: Andray and AJ vs. Kendrick and Big Baby....Wiz giving up about a hundred pounds there.....it doesn't help that Jamison ignores Big Baby and makes Blatche try to handle both on the boards....Davis gets TWO offensive boards....more 2nd chance points.

Songaila is in and is having trouble staying with Leon Powe.....Boston is living in the paint.

8:42: The Wizards just aren't hustling. Blatche and Butler try a half-hearted double on Powe in the backcourt.....he easily split them, but almost turns the ball over by making a bad pass. Songaila and Mike James can't keep Powe off the boards after an Eddie House miss...and Powe gets a dunk.

Andray Blatche kinda showed up in the picture, but not Caron Butler and DeShawn Stevenson. Look, if the Wiz expect to win against just about any team, everyone needs to help on the boards.....the absurdity of second chance Boston points continues. 44-24 Celtics.

Stevenson tries to force a hand-off to Butler with the Celtics RIGHT THERE....prowling like wolves. Wizards turnover.

Mike James is sporadically active so far.....not sure what that means...he's missed three questionable shots, gone 1-2 from the FT line, drawn a charge, and snagged a board.

Boston is too good....too big...and the Wizards offense is too bad. Tom Thibodeau as Wizards head coach? He wouldn't touch this mess of a team with a 10-foot pole.

5:16: Caron Butler enters the game an immediately gives up a lay-up to Tony Allen. Caron? Playing bad defense? Really? It's so bad that Reggie Miller, a bad defender in his on right, calls Caron out. 48-26 Celtics.

TNT shows Grunfeld in a luxury box.....he looks like he is just cussing to himself. Absolutely no one is around him and he's uttering several phrases...surely full of "choice" words.

POINT BLATCHE!!!! Perkins misses a dunk, Blatche tries to lead the break himself....because he's sooooo good at it.....Garnett easily picks him off and Perkins makes up for his gaffe with a dunk. 63-39 Boston. 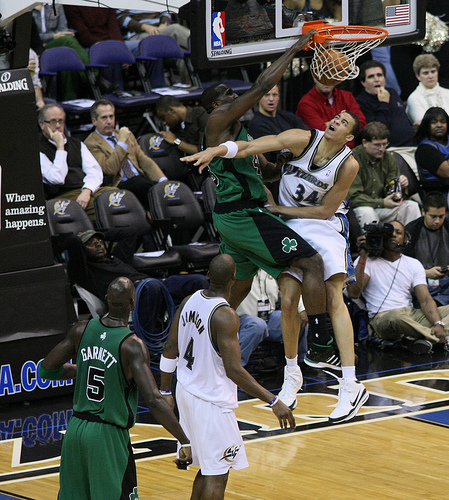 Coming back, the Tsar calls Marvelous Marv out for knowing about the rain outside....yea, he had to be sucking down those cancer sticks, right? Hey, if you can't bite and forcibly sodomize women anymore, gotta manage that tension somehow.

10:22: Garnett offensive board.....that's on Butler...maybe Caron can't block KG out, but certainly don't make it easy for him.

Offense is coming too easy for the Celtics.....they are just allowed to pass and move the ball without much resistance. The Wizards are neither pressuring the passers, nor denying the ball.

7:58: Butler nails a jumper from a Dixon assist and lookie there...the Wiz are down a manageable 16 points, an 8-0 run.....until Ray Allen comes off a screen for a bucket. Yep, Ray Ray is still killing DeShawn. 71-53 Boston.

Next possession.....Stevenson almost travels, throws up some trash....luckily Jamison is there for the board and put-back. 71-55 Boston.

6:45: McGee bangs home a layup, but Ray Allen is allowed to streak down the court for an easy layup. Seriously DeShawn....WTF?!?!?

Reggie Miller commends Jamison for trying....despite the lackadaisical effort from the Wizards.

4:09: Caron Butler takes and misses a bad 3-point attempt...who does he think he is....DeShawn Stevenson?

But the Wizards keep working....sneaking, hustling, sneaking......with a lineup of Songaila, Butler, Dixon, Blatche, and.....Mike James? No Nick Young at this time...interesting.

One minute, Caron Butler is failing to either communicate or switch properly on a screen, and allows a Celtic bucket.....and the next minute, he's making sweet right-to-left moves behind his back and between his legs, driving to the basket and getting fouled.

To start the 4th....Ray-Ray sits.....KG sits.....great coaching move by Doc Rivers. Paul Pierce is in and has the green light to put this game away. Four quick points from Peazy puts it at 93-74 Boston.

Uh oh....bout a minute and a half later....Pierce has abused McGuire for a two and Eddie House has hit two consecutive threes....Mike James? 101-77 Celtics....over.

Sure the Wizards beat the Celtics three times last year...but who cares?.....Boston has the diamond encrusted swagger of a championship ring now.

McGee is making Patrick O'Bryant look like a ball player.....maybe O'Bryant is mad that ESPN.com's David Thorpe compared him to McGee: "McGee has talent, but reminds me of Patrick O'Bryant -- they have similar bodies and irregular heartbeats on the court."