Share All sharing options for: Dee Brown is blessed 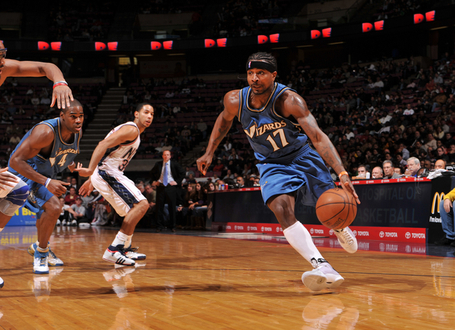 It might sound a little weird to say that Dee Brown is blessed just a day after he was released, but as you'll see, throughout every high and low, Dee Brown has always been blessed and I don't expect that to change anytime soon.  Don't believe me?  Just take a look at the first two sentences on his his website.

I live like there is no tomorrow. I enjoy life knowing I'm blessed to be in the situation I am and knowing things could be worse.

Here's what he had to say after learning that he would get his first career start against the Hawks earlier this season.

"A smile came on my face automatically. It was just a crazy experience. It was just humbling and a blessing. This is my first start in the NBA. I've just got to go out there and try to run the team and play whatever role they need me to play."

During his senior year of college at Illinois, Dee Brown won the Bob Cousy award as the nation's top point guard.  How do you think Dee felt?

"I am so blessed to receive the Bob Cousy Award, and I want to thank Mr. Cousy, the Basketball Hall of Fame and The Hartford for honoring me."

In the NBA, the blessings continued to flow for Dee Brown.  Even when he was injured by a falling Mehmet, he still saw blessing in the pain:

"I'm just blessed enough to be able to move and talk to y'all right now and turn my head a little bit."

After a year in Turkey he got a new chance to make it in the NBA with the Wizards. He knew what he was getting:

"It was a blessing for me. I understand their point guard situation, so I was very excited when the opportunity came my way."

I think you get the idea: Dee Brown is very, very blessed.  More importantly, Dee has passed that blessing on to the people around him.  I love the fact that at a time when Dee could've tried to pad his stars, he played team ball and did whatever he could to try to help the team get victories.  He never forced anything when he was on the court and he always tried to get the rest of the team involved.  When he wasn't on the court, he was always cheering on the rest of the team and shouting out support to the guys on the floor.  Strictly in terms of being a teammate, you couldn't ask for a better guy than Dee Brown.

And it wasn't just his teammates that received blessing from Dee Brown.  Here's what Hoops Addict's Rashad Mobley had to say about him today:

He had the best attitude of any athlete I’ve seen in my limited time covering the NBA.  He was upbeat, grateful to be playing in the NBA after playing overseas last year, and he was determined to make the most of his opportunity.  Whenever he saw me coming in or out of the locker room, he made it a point to make eye contact and ask me how I had been.

Unfortunately for Dee, it didn't work out for him in D.C. but I'm grateful for what Dee brought while he was here.  I know that I can say with confidence that wherever his future takes him, he'll continue to be blessed and be a blessing to others.