Share All sharing options for: Wizards Game 19 Blog vs. Pistons: Agent D-Song, From Lithunania With Love 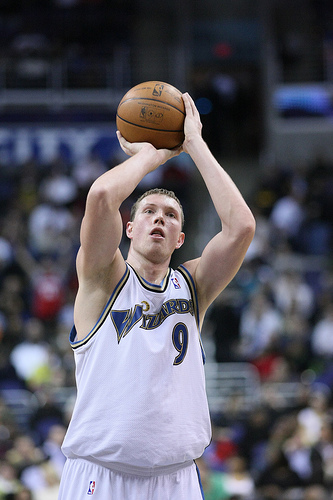 11:31: There goes my theory about JaVale McGee being able to cover 'Sheed with length.....Wallace's high release is still unreachable by a 7'6" wingspan. 2-0 Pistons.

10:10: And a Wizards turnover.....that may be the tipping point for a downfall, the easy passes just aren't crisp....the Wiz seem unintentionally lazy.

10:01: DeShawn is going with the Mohawk tonight...and gets burned to the basket. Stuckey made a quick move to the right while DeShawn kept looking over to his left for a screen that wasn't really there. Luckily, Stuckey missed.

9:42: A couple Wiz under the basket and McGee completely misses the blocking assignment on Tayshaun Prince...offensive board 6-0 Pistons.....JaVale stared right at him.

9:13: Guess who's giving waaaay too much room to a sneaking trailer.....JaVale McGee, Rasheed for three. 9-0 Pistons.

8:15: Sheed uses strength to get position on the block, gets the ball, baby step to the middle, and turnaround J heading baseline. He's 4-5, Pistons as a team, 5-8.

He is who we think he is. Every time Stevenson gets the ball with 8 or less seconds on the shot clock, he feels there's only time for one person, him, to do anything. 8 seconds is a ton of time left, plenty for a cut, a dribble drive...whatever, but it does NOT need to be one dribble and a step-back jumper....and miss.

Prince is determined to get his hands on every ball he can and the Wizards are going to do nothing about it. 6 Tayshaun boards.

Thank god...'Sheed misses. I think they'll go to him until McGee is taken out.

Butler turns it over....at this rate, I bet some MSM type is going to use the phrase "comedy of errors" in the papers tomorrow. 11-3 Pistons.

7:00: Blatche checks in and immediately toys with an Iverson steal attempt by going behind his back and dishing to a cutting Dee Brown for the layup....this guy. 11-5 Pistons.

Rip and Butler tit for tat, outside, inside. 14-7 Detroit.

Neither in the half court, nor in transition, Butler cannot keep up with Rip. 18-17 Pistons.

The Wiz go bigger by getting Young in for Brown.

4:20: As I sigh, having watched the replay again, Andray Blatche is fooled into thinking he has a good shot. With Wallace not out of range to contest, AB takes a deep FT line extended jumper in transition. No one, especially Andray, needs to be jacking up bad shots with 19 seconds left on the shot clock. Miss.

4:14: Classic Veteran Move: Nick Young is beaten in a foot race up the court by Hamilton with the ball and DeShawn must step up to help. But DeShawn's closest teammate, ANDRAY BLATCHE, doesn't communicate that his man, Wallace, has stopped dead in his tracks, setting a pick with his back facing DeShawn.....Rip drive, AI short jumper. It's an easy game for Detroit. 20-10.

If the Pistons haven't scored, it's because they have missed a clean look, and not the fault of the Wizards.

Butler wins a battle against Rip Hamilton with an offensive board and hoop...tit for tat.Going to be tough to win when it's only Caron negating one of Detroit's top players and nothing else....he needs help.

Guess what, the Wizards have gone small to match Detroit...Dixon, Daniels, McGuire, Butler, Songaila...(against Bynum, Stuckey, Afflalo, Herrmann, McDyess).Well, matching the other team has gotta work some time if you think it will give you a better chance. This squad is definitely more active on defense. Jamison checks in for Butler after a couple minutes.

When D-Song > JaVale McGee = when 'Sheed can't back down a Lithuanian....which also leads to a tech on Wallace. Wiz down 10. Better D.

Songaila is a vet, he doesn't care who you are...jumper on Sheed. Wiz Down 8.

Crap...Stevenson's in there.....watching him do something like......make an open three off Butler penetration. Wiz down 5.

Sheed vs. D-Song, two banging bigs. Songaila earns 2 FTs after securing the board and getting fouled by a testy Rasheed. Detroit may have Iverson, but Darius Songaila is our Answer.

Hamilton hits a trey, but Caron shows the determination from him we love with a coast to coast drive at the buzzer. Wiz end the 2nd on a `15-3 run. 46-43 Pistons.

Well, getting to the FT line 12 times to Detroit's 4 tells me something, but not much if they're only making 8 of them.

Well, same starters...save for the rookie. 'Sheed immediately bounces one in against Songaila. 48-43 Wizards.

9:38: Rasheed is contributing in all aspects with assists, dropping a couple dimes...and Daniels is getting KILLED on the cuts.

Yes, another letter. Look, I need more "Daggers!" and less "Stevenson thought about it....now he pulls the trigger, and misses."

Caron has 20 points.....now Hamilton is negating him.....still may not be enough for a Wizards win.

Lovin' It!! D-Song drives, causes Sheed to stumble, hits the lay-in, Wallace falls on his ass. 60-55 Detroit, 9 for Songaila.

5:42: Make that 11 for Lithuania on the delayed pick and roll with Daniels.

Butler sticks out his arm like a vet to create offensive room....slightly where the ref can't see, Rip just grabs his him with both arms out in the open, foul called....Hamilton cries to the ref..."NO!" -- stomps foot....and tech.

2:40: Butler makes it a game....but how much has Drew Cleary conditioned these guys to withstand the comeback and a winning push? 66 ALL.

2:03: Well thank you Antonio McDyess, you go block out Jamison when Prince is already on him and allow Andray Blatche to get a follow slam off a Butler miss. 68-66 Wiz.

McDyess answers with his own follow slam. AJ answers himself with a flipper. 70-68 Wiz.

0:00: Blatche hits a shot at the buzzer from the baseline, created by Dixon dribble. He took several small hops on one foot after the release, playground style. Wizards up 74-68 after 3....who is this team again? Or, what are they?

You must be f-ing kidding me.....An Andray Blatche, pump, drive, right hand slam over Rasheed...who returns with a trey on 'Dray and the "shhhhh...." finger to the crowd. 76-71 Washington.

10:57: Now D Mac has hit a baseline jumper at the shot clock buzzer? The holidays are coming early.

Wow, neither team has committed a TO in the 2nd half so far.

AJ and his fellow Tar Heel are getting physical....'Sheed just hit a trash talking shot while fading behind the basket.

The Pistons have gone big with Sheed, McDyess and Prince against AJ, Blatche, McGuire....would it be time to get McGee in?...but for who? Young or Dixon? Not so sure about that....

9:12: AB goes out with a 4th foul and D-Song comes in. For some, the foul is the only excuse for Tapscott to check Darius in.

8:35: Great, physical footwork by Songaila leads to Rasheed dribbling out of bounds.

8:00: Hey, a Nick young sighting....7th points, helping out on the boards against Sheed, driving to the hoop to earn a foul. This kid is doing the right things. 84-76 Wizards.

.... NY getting his hands in the passing lanes
....NY running P&R with D-Mac who gets the ball and hits a tough reverse lay-up
...Youth using their energy, gotta hope to bottle that in a package deal with Tuff Juice.

6:15: I'm having future visions of a cleaner, taller, more athletic, Bruce Bowen when I see McGuire stop Stuckey and secure the steal all in one.

Songaila good!!!...Shoot, at this point, Butler is still on the court, but getting his rest, watching these other guys do their thing....16 for Songaila. Wiz up 88-78.

Wiz working, perhaps toying with my emotions, up 8 with 5:25 left in the 4th.

You can sense the intensity of anticipating failure from the Verizon Center faithful.

Rip vets a couple FTs....4 point game. Jamison juuuuust missed a nice up and under on Prince...Butler gets a bona fide fresh Tuff Juice board in the paint and fouled by Hamilton......negating the lil' guy more, Butler's shoulders can carry a lot. FTs - 96-90 Wiz.

Good team boards and ball hawking by the Wiz keep the Pistons to one missed chance.

Rip quick points...0:41: Butler pushed Hamilton to the floor, according the Buckhantz, but I'll add that Hamilton had his hands all over him, so if anything , a foul would be called there first. The refs do the right thing and hold onto the whistle.....Caron eventually gets fouled later after the Wiz inbound....FTs.

Phil and Steve wonder about Maxiell and Kwame how warm they've kept the bench.

Dixon trey at the end of the shot clock with 3 or so seconds left in the game...yep, it went like that....and the moon is 90% full (as of game time of course). 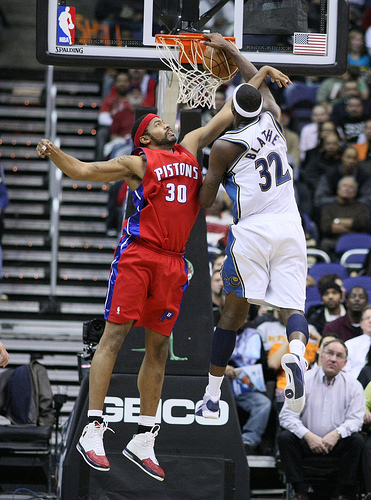