Also, before we dive into Saturday's recap full-force, you should check out these fine recaps from Hoops Addict and Posting and Toasting from Friday's game against the Knicks.

Well, I think that was about what everyone was expecting.  You don't see a lot of teams that struggle guarding the 3 point line and lack a good interior defender win a lot of games against a team like Orlando who has a slew of outside shooters and the man-beast that is Dwight Howard

There's not a lot of positive stuff that we can point to right now, but I want to try to end this recap on a good note, so we're going to do this in reverse.

I try not to be critical of refs because I know it's a tough job, but how does this happen? 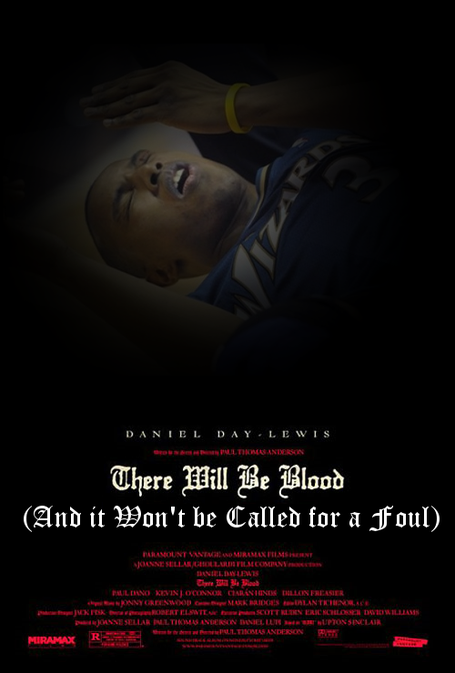 Assists - Yeah, it's kind of hard to win when you only get 13 of those.  It's even harder to win when all 13 of those assists come from just 4 players.

Dominic McGuire - Taser, you know I love ya, but if you're going to get 12:56 of burn, you really need to have more than 1 TO and 1 PF in your final tally.  I know there's a lot more to the game than what shows up in the stat sheet, and most of your contributions come in those areas, but we need little more on the tangible end.

Darius Songaila - You know him.  The guy that plays center for us occasionally, he's 6-9, 248 lbs. you know that guy?  Yeah, he has the lowest rebounding rate on the team.  Lower than JaVale McGee, lower than Caron Butler, lower than Dee Brown, lower than Antonio Daniels.  He's averaging 2.3 rebounds per 36 minutes right now.

DeShawn Stevenson - At least shooting-wise, he was finally able to breakthrough tonight, and it wasn't just because he was hitting more threes at a better rate than normal.  He's still not back to form yet, but it's a start.

Antonio Daniels is injured (hear me out here) - I say that because according to Mike Jones, AD has been battling with the knee issue that kept him out last night since the preseason.  If that's the case, then it's entirely possible that his struggles this season are because of his knee, rather than hitting the age wall, which gives us some hope that he can return to form. Obviously, you never want to see a guy injured, but if some time off to heal up can get him back to normal, it's a far better option then seeing him gut it out at less 100%.

JaVale McGee - Just in case I haven't officially announced it yet, here it is: I was totally wrong about JaVale McGee, and I couldn't be happier about it.

Nick Young - In a season that has lacked bright spots, Nick Young has shone like a beacon so far this year.  He's currently 11th in the NBA in points per 36, higher than Carlos Boozer, Carmelo Anthony, Chris Bosh, Al Jefferson, Kevin Martin, and Richard Hamilton to name a few.  Plus, six of the ten players ahead of Young have a lower FG% and nine of them have higher usage rates than Young.  I know it's only a five game sample and the other parts of his game need some work (though they have gotten bettter this season), but Nick has shown that he's going to be an explosive scorer in this league for many years to come.