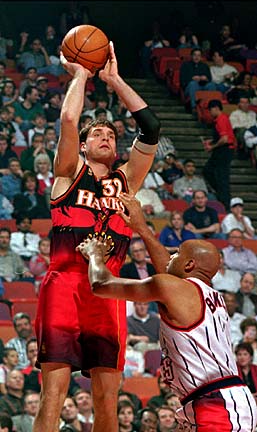 Key Links (drop any others in the comments)
Peachtree HoopsZaza's PlaygroundSekou Smith's blog
Wizards Insider: The Other Side: Atlanta Hawks

Glass glass glass: Our first game against the Hawks was one of the many early-season games where we were pounded on the defensive glass. Atlanta grabbed an obscene 42.3% of its misses in the November 19 game, which essentially was the reason they won since they only posted a 44% eFG% for the game. We didn't spend much time with Darius Songaila in at center in that game either, so it's not like the problem is going to completely go away. Atlanta's ninth in the league in offensive rebound percentage, after all.

Zaza Pachulia had a lot to do with Atlanta's rebounding dominance last time. He had 18 boards himself, eight of which were offensive. The good news is that maybe Mike Woodson will help us out and sit him the entire fourth quarter like he did in Atlanta's five-point loss to Toronto last night.

Three-point test: It's only 15 games into the season for Atlanta, yet they lead the league in three-point shooting percentage. Atlanta is hitting 42 percent of its threes this year, powered by the dynamic foursome of Maurice Evans (49.1%), Marvin Williams (45.7%), Mike Bibby (43.5%) and Joe Johnson (39.6%). The Wizards' defense under Eddie Jordan treated the three-point line as if it was filled with land mines. This will be a good test to see how far the team has come in eradicating its bad habits under Ed Tapscott.

Mid-November blues: So Atlanta is 9-6, but they are 3-6 since starting the season with six straight victories. A lot of that has been the absence of Josh Smith, but perhaps Atlanta just isn't that good. Their three wins during this stretch came by 4 over us, by five over the Bobcats and by six over the Bucks. Not exactly impressive.

What's the problem? For one, Atlanta's not defending anymore. They were outstanding through four games, but sit just 23rd in efficiency right now. I imagine that'll pick up with Smith's healthy return, but either way, we're seeing a regression back to the mean.

The other issue is Joe Johnson. As if he wanted to prove my assertion that he's about as far away from a first option as Pluto is to Earth, he's gone out and shot 33 percent from the field in his last five games. That has prompted some people to go out and argue that the problem is that Joe Johnson doesn't get superstar treatment from the referees. Right.

Tired or not, the problem is that Joe Johnson isn't anywhere close to a superstar. He's a decent third option who can do some things well, but can't be the go-to scorer on a good team. This is what we call "regression to the mean." JJ's a nice player, but without Josh Smith, he's being asked to do way too much. The more JJ shoots tonight, the better off we'll be.

Pushing it: Atlanta's coming off a grueling five-point loss to the Raptors last night in Toronto, so they're making the journey down to D.C. in one day. Atlanta's bench didn't exactly get in much action either. Johnson played 44 minutes. Williams played 40. Al Horford played 37. Mike Bibby played 35. Meanwhile, Flip Murray, Solomon Jones and Acie Law played a combined 27 minutes. They may be tired, so pushing the pace early is key.

My Firefox plug-in isn't working, so I'll just have to go off my subjective feeling that we've played faster in these last two games under Ed Tapscott. That may be because we played Golden State and Orlando, two teams who are in the top 10 in pace this season, but Tapscott has said that he wants to run more. Running will be key tonight, since Atlanta's a slow-paced team that is tired and on the second game of a back-to-back.

I'm going out to dinner tonight with the family, so I'll probably catch this on delay. For those watching, comment here.