Share All sharing options for: Wizards Game 12 Blog vs. Golden State Warriors: New Dawn on a Project in Construction 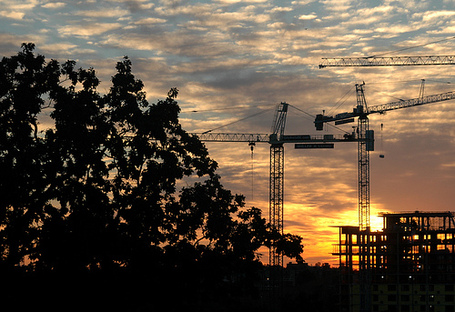 Well, I snuck a peak at the score before clicking to watch the game on NBA.com. After seeing the win, I couldn't help but look at the box score. Upon seeing the box, I especially noticed Andray Blatche's stat line and uttered the phrase, "This muther effer....." I told my dad that the Wiz had won and he wondered aloud if Eddie Jordan was really the problem. "Surely we won't be able to tell after one game," I said. So I watched.....

Sidebar: For some reason, Ed Tapscott reminds me of Rock Newman.

No change in starters from the last game...McGee, Brown, Butler, Jamison and Stevenson.

McGee then loses track of Biedrins who gets open, receives a pass, basket And1. 4-2 Wizards.

The Wizards are getting the ball up the court fast.

Biedrins slips a screen, gets an easy pass, AJ can't handle, and hoop....Andris much more agile on offense than I remember him being before.

The slept on asset of McGee....handles.

AJ with a fast break oop....6 points in that fast break area so far. The low risk decision from Tapscott......run, run, run. Give Warriors a taste of own medicine?

Biedrins shows handles too...blocks McGee and casually brings the ball up the court upon seeing no available guards, the result of pressure from the Wiz.

6:27: Blatche checks in for the active and out-of-breath McGee.

If McGuire is the Taser, then Dee Brown is the Laser. He jets up court, without the ball, on the break off a steal and hits the layup off the pass from Stevenson. 17-14 Wiz.

Chris Miller reports that there is a "more talkative coach in the huddle" -- hmm, interesting endorsement?

What is this I see? Andray Blatche running from one spot to another?

I feel like I'm in a bizarro world.....well, I've already seen the Andray's stat line...it had to happen somehow.

Man, the Wiz are stealing and running like their life depends on it.....the cops are chasing them and they already have two strikes. Fast break points....10. Butler hits two FTs to make it 25-18 Wiz.

Who is this Andray Blatche guy? Ya'll heard of him?

Oh yea, just noticed that AD is back in street clothes...makes sense. Don't want him trying to hang with the running men.

Nick Young hits a two at the buzzer after he bobbled the ball...we'll take it. The Wiz shoot 54% to lead 32-26 after one. 32 points = the most in the first period this season.

D-Mac in with Blatche, Dixon, Young, and Butler in to start the 2nd.

Blatche dropping passes like he used to. I just checked, and he is not wearing a retro jersey...

Whoa....Blatche actually got a rebound and immediately got it to a guard.

The Wiz are even passing the ball better. 10 assists on 15 made FG.

10:11: Gilbert coaching like Rasheed Wallace? It's no coaches board, but he does seem to be explaining a play to someone with a sheet of paper and a pen.

9:47: Butler goes down trying to get a loose ball.....on his butt, he has to clap his hands so that his teammates help him up.....they should be running over there.

McGee had really a fast start, but has missed a bunch of close ones since.....makes will come, he just needs to get stronger so he can finish in traffic.

Dixon keeps firing up some trash.....trying to do too much.....and he's taken out in favor of Stevenson with about 6:20 left.

Not one to really criticize the up-tempo offense of Don Nelson, but at least tonight, the Warriors are very helter-skelter. I guess there's a fine line between when things are clicking and the times they seem to be randomly firing up shots.

4:48: Wiz making sure to go to Jamison who had the advantage against Maggette. 1 FT - 47-37 Wizards...but the Wiz get the offensive board and McGee tries to make a spectacular slam against Anthony Randolph, but misses. The kid needs to learn how to get what's available to him....a power two-hand lay-up would've worked there, or at least got him a foul.

Down the court, AJ gets a steal, Wizards push and Butler throws a perfect oop to McGee who catches with TWO hands and throws it down. Timeout, 53-42 Wizards. Butler holds up his jersey to let everyone know what team he plays for.

D-Song miss, follows shot, and tips the board to Butler for an easy layup. 59-47 Wiz.

The Wiz head into the locker room with a 63-49 lead. Energy was key to this half.

BOARDS: The Wiz are killing, up 29-18 (20-9 in the 2nd quarter alone). Not going to get too hype about this one as Golden State plays a small lineup and is skinny when big....although, Biedrins is the league's top rebounder.

Butler gets it to McGee cutting down the lane, but he gets stripped...ball out of bounds to the Wiz. McGee thinks he might have gotten fouled, but he needs to hang on to the ball. I can see why Butler calls him a LemonHead though....he gets that funny sour-puss look on his face a lot.

McGee picks up his 4th personal foul 55 seconds into the 2nd half....well, that will happen with starting him.

I guess we can end the Amber Alert for Andray Blatche....he hits a jumper and then blocks out while Jamison gets the board on the other end...."That's the way you do it," says Phil Chenier. 70-55 Wizards.

6:10: Stevenson fires because that's what he does every now and then....miss.

Remember when Andray Blatche used to block shots? Yea, that's back too.....of course. He has three so this quarter I believe.

We hear "clean slate" and "Andray Blatche" from Comcast's Chris Miller....and I don't like it. When a player is playing bad....and it's HIS fault, then I'm not down with creating some reliance on "new beginnings" and "clean slates" to absolve someone of past transgressions.

Meanwhile.....Blatche is skying for two-hand rebounds....REALLY? Where the eff did that come from? Aside from this game, I haven't seen Andray get a two-handed rebound just about all year.

Warriors are providing the Wiz with some good medicine in the form of turnovers.....we'll take 'em. 88-68 Wizards with 2:13 left.

With the last shot, Nick Young dribbles too much against Stephen Jackson..nothing doing. Nonetheless, the Wizards are up 93-72 after three quarters. If they can't hold onto this one.....wait, I know they already have.

Three offensive rebounds by Blatche on one trip down the court. Where has this effort been all this time? I'm not saying it's the case, but it would be a damn shame if this kid's effort is contingent on someone else (Eddie Jordan) and not him.

8:12: Blatche great touch pass to Jamison over a fronting Maggette for the hoop and the foul. No FT, but the Wiz get the offensive board, their 21st, a season high. Butler eventually gets a Tuff Juice layup. 108-84 Wiz.

7:07: Andray Blatche goes out to a nice ovation and Phil Chenier immediately wonders what I do....yep, the Orlando Magic and Dwight Howard are coming to town.

Wizards a swarming to every ball.

Dee Brown is a gnat all over the place.

Tits All Arms McGee is doing his thing.

Butler is hitting more treys....7 FGs in a row.

3:15: Dixon, Young, McGuire, McGee and Songaila are in.....sorry Etan and Big Oily Pecherov, your services are not needed.

This looks like a bad CYO game now.....if only D-Song would try his And One street moves.

The Warriors call a timeout with 1 second on the clock.