Share All sharing options for: The JaVale McGee FAQ: Part 2 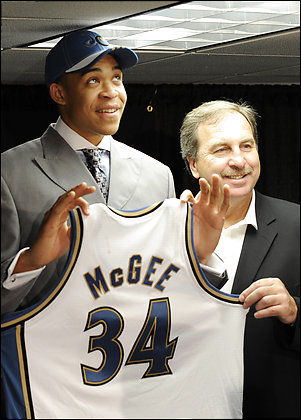 One of the biggest surprises for the Wizards (and for the rest of the NBA) has been play of JaVale McGee.  Unfortunately, with the Wizards at 1-6, there aren't a lot of people that want to invest the time to see him right now.  With that in mind, here's a FAQ to help you get up to speed with all that is JaVale McGee.

So, getting back to where we left off last time, when did fans realize that JaVale could be a meaningful contributor?

Well, it probably started in the third game of the season when he threw down this dunk and had a productive 9 point, 5 rebound, 1 block performance in only 13 minutes of playing time.  Then he had his real coming out game later that week against the Knicks where he posted his first double-double and threw down 3 JaVale-oops, making him an instant fan-favorite.

What makes JaVale so fascinating?

Technology can't keep up with him and equations can't explain him.  In a lot of ways JaVale McGee is basketball's dark matter.

Chris Paul went on record saying that JaVale had athleticism in the "Dwight Howard category."  Is that a fair comparison?

I highly doubt it.  The thing that you have to remember is that the Dunk Contest is about more than who can dunk the highest and farthest.  Now, more than ever, style is everything in the dunk contest and Nick Young has mad style.  That's not to say that JaVale doesn't have any style, but to this point I haven't seen anything in his dunking that makes me think he would be the right type for a Dunk Contest.

At this point if I had to choose, I would still pick Nick Young to represent the Wizards, because I think he has a far better shot at winning.  But if Nick and JaVale were given the opportunity to participate, I wouldn't complain one bit.  It would almost make up for the Wizards not having a participant at any point in the history of the contest.

A lot of the Wizards have nicknames, has JaVale picked up one?

Actually, he has quite a few:

Epic Vale seems to be the popular choice right now, but feel free to mix and match as necessary.

Just so I can have a visual, could you give me a little side-by-side of JaVale McGee and Lemonhead so I can see what everyone is talking about?