Share All sharing options for: The JaVale McGee FAQ: Part 1 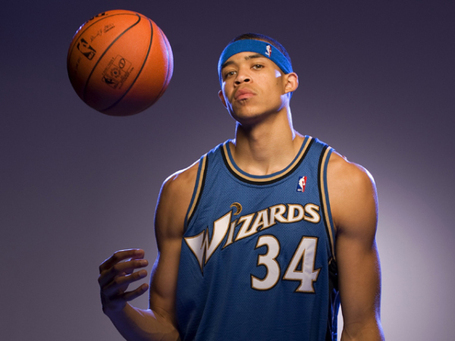 One of the biggest surprises for the Wizards (and for the rest of the NBA) has been play of JaVale McGee.  Unfortunately, with the Wizards at 1-6, there aren't a lot of people that want to invest the time to see him right now.  With that in mind, here's a FAQ to help you get up to speed with all that is JaVale McGee.

If you could describe JaVale McGee in one word, what would it be?

Looooooooooong.  JaVale is a legit 7-footer with a 7'6" wingspan and impressive hops to go along with it.  No shot is safe when JaVale is on the court.

Well, it sounds like there's a lot to work with there.  Wizards fans had to be happy to get someone like that with pick #18 right?

Not really.  In fact, the reaction was just about the opposite of what you would expect.  Let's take a look at some of what was said on this very site on draft night.

Who is that dude?

With both Kansas guys on the board we pick this bum.

I would rather have Koufos or Jordan.

This kid is going to be legit…

in the D League next year.

Not exactly a ringing endorsement, more like a thudding disapproval if there is such a thing.

Well, he obviously turned the tide of opinion at some point.  Did he do it during the Summer League?

Did any Wizard bloggers propose that JaVale should spend some time in the D-League this season?

I can't seem to remember any...

So when did JaVale turn the tide of popular opinion?  Surely, it wasn't during some boring preseason game that wasn't even televised.

Actually, that's where you'd be wrong.  JaVale's 20 point, 8 rebound performance against the Grizzlies in only his second career NBA game put everyone in Wizards-land on notice that he might be more developed than we originally thought.  Still, no one was expecting him to do much in his rookie season.

Alright, so when did fans start to realized he could be a meaningful contributor?

Well, if there's a Part 1, logic dictates there has to be a Part 2, right?

So you're just going to leave us hanging until you get Part 2 written?