Editor's Note: Yes, the season's technically started, but I think it's early enough to finish these up. -PM 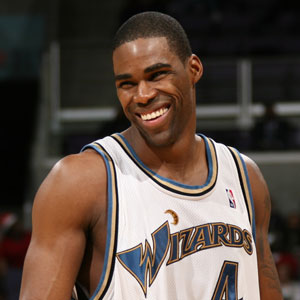 Last year, Antawn really was a different player in years past.  He played more on the inside and took more contested shots with Gilbert Arenas out.  The end result was a tradeoff; his percentages all plummeted, but his rebounding numbers all rose significantly and he shot more free throws than in 2006/07.  With Arenas out again, we need to have this Jamison in the short term instead of the Jamison we saw in 2006/07.  Both are valuable players, mind you, but the former Jamison works best with Arenas in there, and of course, Arenas is out right now.

The problem is whether the second Jamison is the one we're going to get with Brendan Haywood sidelined.  One of the purveying theories you see on this here site is that Haywood's ability to take up space made it easier for the smallish Jamison to mix it up inside.  Jamison's size isn't as much a deterent as many think, but the fewer bodies Antawn has to shed the better.  Haywood also communicated Antawn's defensive responsibilities, a theory Jamison himself admitted earlier in the preseason.

Can Antawn do the same things he did last year when his pivot mate is Etan Thomas or Andray Blatche?  The last time Etan played, Jamison's production was marginally better with Haywood, but not significantly so, though it's important to note that Gilbert was healthy.  The difference between Haywood and Blatche, though, was significant last year.  Jamison scored more (22.1 pts/48 to 19.9 pts/48), shot better (43.6 to 39.7) and rebounded more (10.6/48 to 9.6/48) when paired with Haywood as compared to Blatche.  Since we have no data of Jamison playing with Etan while Gilbert Arenas is injured, I think we can throw that data out the window as well.

In essence, Antawn's the one guy that's going to suffer without Haywood in there.  Still, he needs to at least try to mix it up inside.  Eight threes and three rebounds isn't going to cut it for this Arenas-less team.  The good news on that front is that Jamison realized he hung on the outside too much against New Jersey, so I expect him to be a lot better in future games.

The bad news is that I see his numbers dropping with Brendan out.  More than anyone, Antawn is going to see his production suffer with Haywood's injury.  Luckily (hopefully), when Gilbert comes back, at least we can see a return of the solid 2006/07 Antawn that helped us a ton in past years.