I hate being a fan of this team sometimes

Share All sharing options for: I hate being a fan of this team sometimes 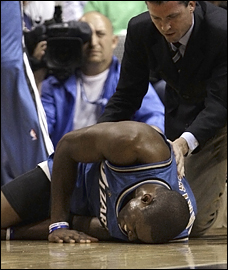 I know, I know, there are already a couple threads going already, but has there ever been a more snakebitten team in history?  We're basically talking about potentially losing 3/5 of your starting lineup before the first quarter of the first preseason game of the year.

In my case, without a computer and being out of market, I had no way of following the game, so I literally was blindsided when I logged on and saw this information.  I don't know if that makes things better or worse.

I know Jamison says his injury is not serious, but pardon me if I say "prove it."  Only in D.C. would Brendan Haywood go from being out for a week to being out for potentially the entire season.  Seeing Jamison's injury on replay, that fall was not natural.  In fact, it kind of reminded me of Shaun Livingston's injury in that it was totally unprovoked.  I'll be hoping the best tomorrow, but that won't do much.

If Haywood is really out for 4-6 months, we're in trouble.  Andray Blatche can come into his own all he wants and Etan Thomas can recover as healthy as ever, but neither of them can possibly do all the things Haywood does.  Neither can defend the paint like Haywood.  Neither can guard the top centers in the league like Haywood.  Both are more mobile, sure, but neither are disciplined defensively, which will absolutely kill us even with a year of Randy Ayers under our belt.

Jamison's injury would only make things worse, but folks, we're already in trouble.  I really, really hope I don't have to utter the T-word tomorrow, but that might be better than the utter mediocrity we might become without Gilbert Arenas AND Haywood.