That's one way to start your preseason off with a bang

Share All sharing options for: That's one way to start your preseason off with a bang

Editor's Note: Make sure you check out Truth's update on Haywood's wrist which was inadvertently shoved down the page by me posting two minutes after he did. -Jake

So...going into our first pre-season game we already knew that we would be without our best scorer until at least December, but probably longer. A tough pill to swallow, but one that we've swallowed before and managed to be okay with.

Then we get the news right before the start of tonight's game that Brendan Haywood, who originally looked like he would be out for a week, now might be out for 4-6 months.  Awesome.  Just what we needed to take that next step this season.

Then less than 5 minutes into our first preseason game, this happens: 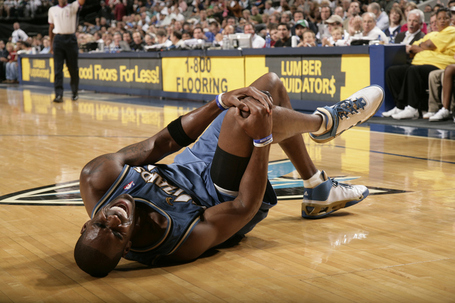 The early word from the training staff (according to Comcast SportsNet) was that he had a sprained right knee, only to say later that he had a strained right knee.  As you all know, I'm not a doctor, but I know enough to say with confidence that anything involving the word knee isn't a good thing.  Luckily, Jamison seemed to be in good spirits in the locker room, but we've all seen knee injuries that look terrible end up being nothing and we've seen players walk off on their own power and...well, you know what's happened since then.

This year, it took us all of 5 minutes of preseason basketball to possibly lose 3/5ths of our starting lineup.  Some people will obviously take this time to talk about all the injuries the Wizards have faced and how cursed the team is, but let's give some credit where it's due: The curse is nothing if not swift and efficient.

QUICK UPDATE: Jamison thinks the knee injury "isn't serious" which sounds good to me, but I'm still holding my breath until the MRI results come back.  Of course Ivan made sure to temper that news that Nick Young will be out for a week and a half or so with a sore knee.