The Pradamaster's Note: We're going to discuss and predict each individual player's production this year.  This includes simpleton stats (aka per-game numbers) and the advanced ones (regular readers know these).  Feel free to predict as many or as few categories as you like. 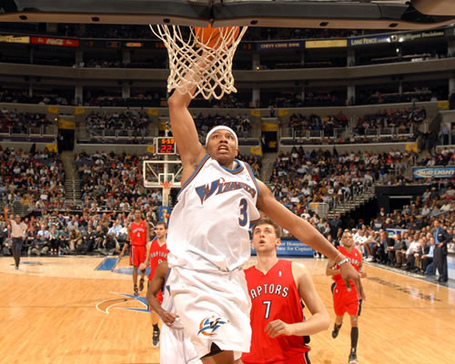 07-08 Per Game Numbers (via Basketball-Reference.com):

As far as those per game numbers.....pretty damn awesome if you ask me. I'll be more than content if all stay relatively the same in 08-09 (well, with the exception of FG% -- I'll cover that in a sec), but with Tuff Juice appearing in more than 58 games.

Remember, before last season, our friend John Hollinger put Butler on his 'All-Decline Team' -- so much for that. What say you this year John Hollinger? This season, Hollinger says, "one has to think he'll match his output of a year ago at the very least," and predicts only a 1.21 drop-off in PER to 19.38 (Hollinger has last year's PER for Caron at 20.59 on ESPN.com).

So durability for Butler is becoming a question......we all want less minutes per game and more games, right? For the Wizards to be in the mid-range playoff seed discussion, Hollinger thinks that Caron needs to be on the court for "3,000 minutes or so" (he played 2,314 total minutes last year - 18 NBA players played 3,000+ minutes last season).

However, if Butler's average time on the court goes down a full three minutes to 36.9, Caron will have to appear in 81 games to get close to 3,000. Then you gotta think....Butler is the best player on the Wizards, does Eddie Jordan have any choice but to keep Butler among the NBA's top 20 in minutes per game? (The 20th ranked player averaged 37.7 mpg last season.) So realistically, our best hope is that Caron Butler gets an extra 120 seconds of rest each game.....Eddie Jordan better use that time wisely (at the end or beginning or quarters).

Minutes are minutes.....they'll just have to play themselves out on a game-by-game basis. What I'm really concerned about is the feeling I get about Butler settling for jumpers too much. Don't get me wrong, Caron's got a killer mid-range game and if other teams are going to give him the opportunity, make them pay.....but please don't sacrifice offensive movement in doing so, especially early in the possession.

The numbers above reflect from where a percentage of Butler's total shots come (don't ask me about the missing 2%....the 82games people round their percentages), the number of And 1 opportunities (not conversions), and the percentage of fouls drawn on all FG attempts. Three point attempts can stay the same, but I'd like to see Butler's inside shot attempts climb to at least 30%....which would hopefully get his FG% up past .475.

But that 9% of FG attempts drawing fouls stat.....we need the guy who was 6th in the league in FT% to rank higher than 146th in the NBA in this category (or technically, tied for 133rd with 24 other dudes who are at 9%).

Paul Pierce takes 33% of his shots from 3-point land and 29% from inside (37% on 2-point jumpers), yet draws fouls 16% of the time. Manu Ginobili and Kevin Durant each took the same percentage of inside shots as Butler, yet drew fouls 13% and 12% of the time respectively. Is at least a 4% increase of fouls drawn to 13% too much to ask for Butler? I think not.

Now what say you?