The Pradamaster's Note: For the next eight days, we're going to discuss and predict each individual player's production this year.  This includes simpleton stats (aka per-game numbers) and the advanced ones (regular readers know these).  Feel free to predict as many or as few categories as you like.

So far, we've done Gilbert Arenas, Andray Blatche, Dee Brown, and Caron Butler.  Our prototypical backup point guard who will be our starting at point guard for the first month or so this season is up next. 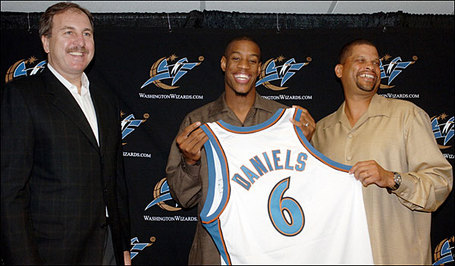 I think that we've all gotten a good feel for what Antonio Daniels brings to a basketball team, but just in case you just got back from your decade long vacation to Mars (And you're checking out Bullets Forever on your first day back?  Excellent choice.), here's an excellent summary of what you'll get from Antonio Daniels.

Daniels spends most of his time on the basketball court. Literally. I don't think I've ever seen him drive in the lane without falling on his head. Whether he is trying to throw down his classic one handed jam, driving the & passing off, or even guarding a player on the perimeter, there is a strong chance that a few seconds later, Daniels will be laying on the floor. The good thing is that fouls end up being called a lot of the time.

When he is not making fans hold their breaths as he falls to his doom, he is running the offense. Running the offense at all costs. He slows up fast breaks and holds the ball at the top of the key for 10 seconds to calm his players down, and get them in position. While frustrating for fans, it can be good for the turnover prone Wizards.

The best part about Daniels is that he plays hard & hustles. He is not afraid to get knocked around, and he is tough on defense and when he has the ball. Occasionally he will hit a big jumper but he is mostly a passing/driving guard.

At the age of 33, it's highly unlikely that we'll see AD go off that script this season.  By this point in his career, he basically is who he is, so it's unreasonable to expect him to change a whole lot now.  Some of those numbers will change a little bit here and there, but if you're holding out hope that this is the year that Antonio Daniels gets some arc on that jump shot and becomes a legitimate perimeter threat,, you should probably stop now.

Maybe that last sentence sounds a little cynical, but I mean it in a good way.  Even though I find it hard to believe that Antonio Daniels will take a step forward this season, I also find it incredibly hard to believe that he'll take a step back either.  There are a lot of players that could surprise us in a good or a bad way with their production this season, but I feel confident in saying Antonio Daniels will not be one of them.  He's proven himself to be a consistent, reliable option throughout his career and I see no reason why that should change this season.

The one thing that we will have to keep our eye on is how long it's going to take for Gilbert Arenas to come back.  Daniels started more games last season than he ever started in his career and you saw that he did wear down a little near the end of the season.  So while I don't think any of us want to see Gilbert come back before he's ready, we have to keep in mind that every game Gilbert isn't on the court, Antonio Daniels is on, and more times than not he's hitting it pretty hard.

A lot of people have criticized the Wizards for maintaining the status quo this off-season, but I feel comfortable saying that we'll see more of the same out of Antonio this season, and for the Wizards, that will be a good thing.