We did Gilbert Arenas yesterday.  Now, it's Andray Blatche's turn. 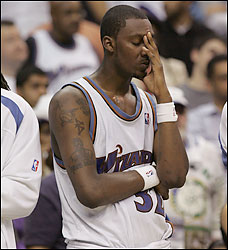 I'm heading out the door, but I'll have more later.  For now, begin the discussion.

Before we start, we really must remember that, in many ways, Andray Blatche took a major step forward last year.  Yes, he still has a long way to go, and yes, he has looked very bad this preseason.  But looking at last year, he wasn't the most efficient shooter, but he cut his turnover rate way down, shot a decent percentage from the field (though it should be better and he needs to draw more fouls) and improved a bit defensively.  I never would have thought he could play center before he proved it last year.  We also has to remember that he's only 22 and has four years left on a very, very cheap contract.  If he doesn't improve one bit this year, he is still a bargain for the amount we're paying for him.

Still, a lot of these numbers seem a bit hollow.  If you look at PER, you'd think Blatche is on the way to stardom, but he wasn't a very efficient shooter, he still turns the ball over too much and he fouls like crazy.  Defensively, he still was out of position too much, though he was an improvement on that end from the 2006/07 Etan Thomas.  And just as it seemed he started to get how to handle himself, he fell out of the rotation (deservedly) and gets caught with reckless driving this summer.

In terms of measurables, I want to see Blatche cut his foul rate, obviously.  He needs to contine improving his turnover rate, which is still mediocre.  His rebounding fell off a bit from his first two years, which is pretty concerning, and I hope it comes back to that level.  I also want to see him shoot better around the basket, which is why I included those stats in the first place.

Qualitatively, though, my biggest problem with 'Dray is that he doesn't make quick moves.  He's tentative and awkward, almost like Chris Webber when he used to post up.  'Dray's never going to develop Webber's passing and shooting ability, so he needs to become stronger and more able to make quick moves.  Otherwise, all he's got as far as an offensvie repitrore is his low-percentage mid-range and hook shots.  I also think he needs to stop talking about being serious and start talking about being consistent and confident.  He needs to focus on playing a role rather than trying to be both an inside guy and a point guard.  Stay on the block!

I'd honestly be happy if he matched his offensive numbers from last year, so long as it includes a jump in minutes, a cut in his foul rate, improved defensive numbers and better shooting around the basket.  Realistically, only the first and third options are to be expected.  He's still not going to be a strong finisher than dunks in your face, but if he can improve his shot selection from the perimeter, he'll become more efficient.