Nick Young....the lovable little scamp (picture Homer rubbing Bart's head and telling him to run along after he's done something bad) is all the rage. He's given himself the nickname, Bean Burrito, which was shot down by a vote in favor of "The City." He's nicknamed a teammate the White Hole and has had boxing matches with another. The kid even had a movie made about him, and a couple bloggers reviewed it.

Now, our young LA friend has lost a bet with DeShawn Stevenson and looks like "a damn rooster"....according to Caron Butler. But seeing as Young had a strong preseason performance last night, the "uh oh" with his knee may be in the past and the Monumental Air Movement is in full effect.

So in honor of the guy, I officially present Nick Young's new alternate nickname (akin to the alternate gold jerseys), The Red Rooster: 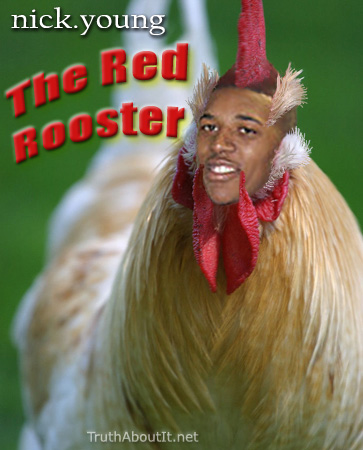