It ain't easy being Oleksiy Pecherov

Share All sharing options for: It ain't easy being Oleksiy Pecherov 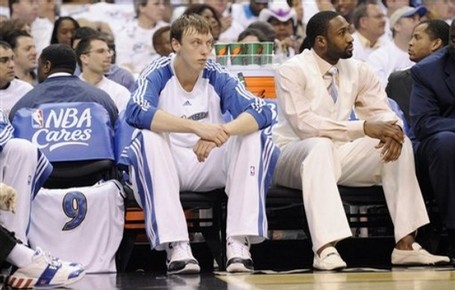 In recent weeks, some fans have vented their frustrations at the former first-rounder for not being further along in his development by now.  Looking strictly at the numbers, such concerns are understandable.  3.6 PPG on 35.2% shooting isn't exactly the what you expect out of #18 pick, but he's had to deal with a lot more than most of the players in his draft class.

Just imagine the stress you've dealt with when you've moved.  Now take that and instead of moving to another city or state, imagine going to a new country that's nothing like your old one.  New food, new timezones, new music, new everything.  Add to that the stress of learning a new offense as complicated as Eddie Jordan's on the fly, adjusting to the nuances of the NBA game, and dealing with all the hazing that rookies have to deal with in their first year, especially being a rookie on the Wizards.

As tough as that is, you're only hitting the tip of iceberg with Oleksiy.  Consider that if he has to fight for minutes with an All-Star in Antawn Jamison, an multi-skilled player in Andray Blatche, and a savvy vet like Darius Songila.  Not only that, but teammates can't spell his name, his nickname is the "White Hole", he looks like Stewie from Family Guy, and to date, his biggest highlight was being dunked on by Andres Nocioni.  Oh, and let's not forget about that ankle injury that cost him playing time and the chance to mesh with his teammates early in the season and another ankle injury that kept him from playing in this year's summer league and is still keeping him from being 100% right now.

He had a lot more to deal with in his rookie season than most rookies and it's looking like it's not going to get any easier this season for everyone's favorite Ukranian import.  Here's the sobering report from Mike Jones (who!):

"For me, this year has been a lot of injuries, starting last year at start of preseason," said Pecherov, who averaged 11 points and six rebounds playing professionally in France in 2006. "But this time at least it was summer time, so I didn't miss any games, but still it's frustrating. I haven't been so hurt in my life."

Another factor making minutes hard to come by for Pecherov is that he has two All-Stars ahead of him in Antawn Jamison and Butler, a savvy veteran in Darius Songaila as Jamison's backup and an improving Blatche, who can spell either starter.

"He's not getting a lot of minutes because Darius and Andray are the forwards on one team and Antawn and Caron are the forwards on the first team, and then we rotate him in, so he's missing some rotation minutes right now even in practice," Jordan said.

When he does see action, Pecherov said he plays tentatively because of his ankle. He said he tries not to think about the ankle or the pain, but without even realizing it, he hesitates before jumping or doesn't run as hard. And in a competitive camp in which every player goes hard, he's left behind.

"I need to be tough mentally and not be afraid to run and jump like I did before, but I just think I need some time to do that," Pecherov said.

So, it looks like we'll have to wait a little while longer to see Pecherov in full.  Maybe it'll take a month, maybe it'll take another year until we get to see what he can do when he's fully healthy.  Once he gets there, we'll finally be able to see if he was deserving of being drafted where he was.  I'm not sure if he'll be able to live up to his draft slot or not, but I do know one thing: If he doesn't live up to it, it won't be because he took the easy road out.