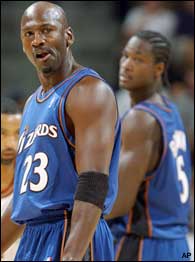 This is Pradamaster, by the way. Jake started and I finished.

My computer is still fried and will likely be for a little while (something about a broken graphics card and the new ones being on backorder), but I've comandeered a computer to write this thing up. It does mean I likely won't be participating in tonight's thread, but those there should still post post post.

This here's our only home preseason game before we hit the European vacation, armed without our most marketable player (take that, NBA!). We talked extensively about Detroit a few posts down, so there isn't much to say about them at this point.

Not sure as to whether Antawn Jamison will play tonight. Frankly, it's probably best he didn't anyway. We get more Blatche and more Taser for it.

I'm curious to see how Blatche, JaVale and Oily do against Detroit's surplus of bigs. Each brings something different to the table, and they'll be much more of a challenge than Marc Gasol. In particular, Jason Maxiell killed us last year on the offensive glass. I'm interested in how well our young bigs put a body on him.

Otherwise, all we need is to pray that nobody gets hurt.

This is an open game thread, so boo Kwame here.